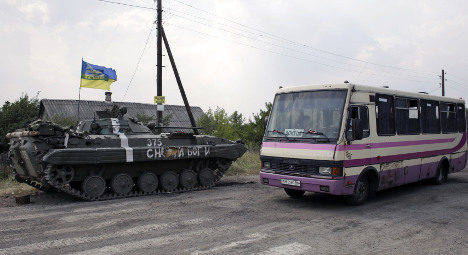 Ukrainian troops have moved in on Donetsk, the largest city in eastern Ukraine, pounding neighbourhoods with shelling. Photo: Anatoli Stepanov/AFP

French President Francois Hollande on Tuesday told his Russian counterpart he had "grave concerns" about the prospect of a unilateral Russian mission in Ukraine.

"He stressed the grave concerns that the possibility of a unilateral Russian mission on Ukrainian soil had prompted," Hollande's office said in a statement after the French leader had spoken by phone to Vladimir Putin.

Hollande emphasised that a humanitarian operation "could only take place on Ukrainian territory if the national Ukrainian autorities gave their consent, both in terms of the format of the mission and on how it would be carried out."

"It has to be done within a multilateral framework and under the umbrella of the International Red Cross," added Hollande's office.

The French leader's comments came as a Russian convoy of 280 carrying "humanitarian supplies" was snaking its way towards conflict-wracked eastern Ukraine, despite fears in the West the mission could be a pretext to sneak in support for pro-Russian rebels.

Ukraine has said it will not allow the convoy to enter its territory and stressed that any humanitarian aid be handed over at the border.

In a later conversation with German Chancellor Angela Merkel, the two leaders agreed to "continue their joint efforts to move towards a political agreement."

They said they had "identical views" on the Ukraine, "in particular on the conditions for a genuine humanitarian mission".

Earlier Tuesday, French Foreign Minister Laurent Fabius said: "We have to be extremely careful because this could be a cover by the Russians to set themselves up near Donetsk and Lugansk and declare a fait accompli."