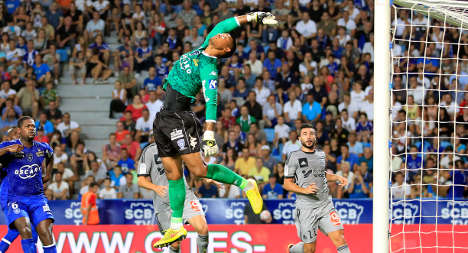 Bastia's French goalkeeper Alphonse Areola makes a save during the match with Marseille that was marred by violence. Photo: Pascal Pochard Casabianca/AFP

Twenty-year-old Valentin Lavigne scored with three minutes left to hand unfancied Lorient a shock 2-1 victory over Monaco in the final match of the opening weekend in Ligue 1 action on Sunday.

But Lavigne broke clear of the defence to slot the ball past Croatian 'keeper Danijel Subasic.

"I understand that the fans are worried," admitted Jardim. "We want to win and give them football of quality.

"I would have preferred to lose in the pre-season than on the opening day of the league. But I can promise the fans that we are going to work hard to continue to move forward."

The visitors stunned the Louis II faithful, including Prince Albert, as they forced a penalty after just ten minutes when Aymen Abdennour committed a foul inside the area.

Cameroon international Vincent Aboubakar made no mistake from the spot as he planted a low shot past Subasic to put Lorient 1-0 in front.

Lorient goalkeeper Benjamin Lacomte, who spent last season on loan at second division Dijon, dealt with everything that came his way before the referee awarded Monaco a penalty with 12 minutes left.

But despite Falcao's strike, it wasn't enough.

Caen are the early frontrunners on goal difference after their 3-0 win at Evian on Saturday.

Lyon, who won their titles consecutively from 2002 and 2008, opened the scoring in their first league match under new coach Hubert Fournier with a strike from 34-year-old midfielder Steed Malbranque after 64 minutes.

French international Alexandre Lacazette, who scored 23 goals last season, made the points safe from the penalty spot with 16 minutes left.

Champions Paris Saint-Germain were held to a 2-2 draw at Reims in the Ligue 1 curtain raiser on Friday.

It was not the ideal start to the season for the capital club, but coach Laurent Blanc had warned that PSG would need time to find their feet with a host of leading players only recently beginning their preparations after taking holidays in the wake of the World Cup.

And starting slowly is nothing new for PSG, who have now failed to win their opening match in any of the four seasons since Qatar Sports Investments began their revolution at the club in 2011.

"I thought my team played well. My only reproach is that they didn't kill the game off inside the first 20 minutes," Blanc told beIN Sports television.

"We expected it to be difficult and we didn't get the result we wanted but it is encouraging for the future because nobody could have complained had we been 4-0 up early on."

Summer signing David Luiz did not feature in the visitors' squad, while Yohan Cabaye, Blaise Matuidi, Maxwell and Ezequiel Lavezzi were also absent, but Brazil's Thiago Silva surprisingly started, and captained the side, having only come back to Paris earlier this week.

Marseille were pegged back in a 3-3 draw at Bastia 24 hours later in a match marred by crowd trouble.

Forty-four French riot and para-military police officers were injured when clashes broke out after a football match between Marseille and Bastia, the interior ministry said Sunday.

In a statement the ministry said 10 members of the CRS riot police and 34 gendarmes were "injured or bruised" when violence broke out at the stadium on the island of Corsica "before and after" the Ligue 1 match, which ended in a draw on Saturday night.

A source close to the case said scores of supporters of the Bastia team attacked police officers outside the stadium, pelting them with stones and explosive devices.

Interior Minister Bernard Cazeneuve called for "an end to this violent behaviour, especially towards security forces who must be respected."

In April the Upper Corsican municipality banned supporters of neighbouring club AC Ajaccio from going to Furiani stadium for a match against Bastia.

There were also opening day wins for Saint-Etienne, Bordeaux, Nice and Nantes while Champions League hopefuls Lille, who drew Porto in the final qualifiying round, were held to a 0-0 stalemate at home by Metz.