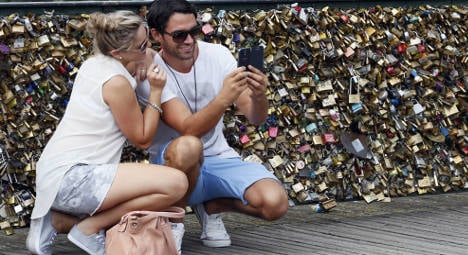 Will "selfies" help take the weight of Paris's bridges by taking over from lovelocks? Photo: Patrick Kovarik/AFP

Note to romance-struck couples strolling in Paris, the eternal city of love: please consider immortalising your passion with a "selfie" rather than lashing a padlock to a city bridge.

That was the message issued on Monday by City Hall authorities, desperately trying to save its bridges, including the world-famous Pont des Arts, from damage from the thousands of padlocks left there by lovers to pledge their eternal devotion.

Since 2008, when the craze first began, thousands of couples from across the world have visited the Pont des Arts every year and sealed their love by attaching a lock carrying their names to its railing and throwing the key in the Seine.

But too much love can be a dangerous thing and the city authorities have been wrestling with the problem of how to halt the phenomenon, which is beginning to take its toll.

In June, police hurriedly ushered tourists off the Pont des Arts when a section of the footbridge collapsed under the weight of the metal displays of affection.

City Hall authorities told AFP: "The idea is to give couples the alternative of a selfie instead of a love lock and explain that they are weighing too heavily on Parisian bridges."

SEE ALSO: The things tourists do that annoy Parisians

Two young Americans living in Paris founded the No Love Locks campaign and have gathered thousands of signatures for a petition they launched in March calling for the locks to be removed, saying they are eyesores and cause damage to the bridges.

On Monday Lisa Taylor Huff and Lisa Anselmo told The Local they "selfie" idea was a move in the right direction by Paris Town Hall.

"No Love Locks is pleased and encouraged by the mairie’s new campaign to promote #lovewithoutlocks," they said.

"This is a great first step in what we hope will be an aggressive campaign to stop and reverse the destruction of the UNESCO Heritage Sites of Paris, now endangered by “love locks."

But while the pair applaud the move, they would like Pairs mayor Anne Hidalgo to take a harder stance against those who continue to lock their love to the bridges.

We will also continue to encourage the mairie to create a ban on the practice of “love locks” as we believe this is the most effective way to curtail the practice once and for all. Bans in other cities such as Rome, Venice and Florence are working," they said.

Notices have been put up on bridges encouraging lovers to take a selfie and upload them to a special site (lovewithoutlocks.paris.fr) or to tweet them with the hashtag #lovewithoutlocks.

The site already contains several photos but only time will tell if it can distract the scores of lovers away from the bridges.

"It's the first step in a wider action plan … an initial communication effort to tell people that love locks are not good for Paris's cultural heritage and that actually, it's not an ideal way to symbolise love," the City Hall added.