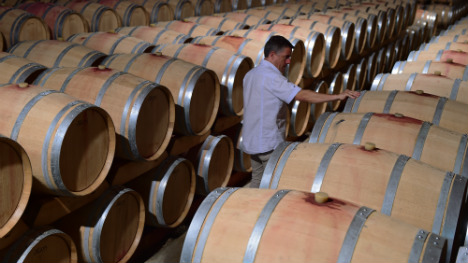 In a bid to bring out the fruitiness enjoyed by many new wine drinkers, the Vinneo project has been developing the blackcurrant aroma of the Fer Servadou grape variety and the violet aroma of the Negrette variety.

Since 2009 it has been working with scientists on technologies to develop a range of varietal wines — ones made from a single-named type of grape — to appeal to the palates of consumers worldwide.

Vinovalie, which is leading the projects, is a group of four major cooperative wineries in southwest France. They represent the appellations of Gaillac, Fronton and Cahors and are one of the area's largest producers of red and rose wines, along with a small amount of white. For too long, Tranier said, French winemaking had "overplayed the return to tradition" while at the same time ignoring innovation — to the detriment of the industry.

In particular, he believes French winemakers have neglected the fruity flavours enjoyed by newer wine drinkers in fast-growing markets such as Asia, and which are often found in New World wines.

"We used to think that the whole world revolved around French wine," Tranier said.

"At the beginning of the 2000s that orthodoxy collapsed. We realised all of a sudden that we had competition," he added.

The project — run in conjunction with researchers at the National Polytechnic Institute of Toulouse (INP) and the French Vine and Wine Institute (IFV) — now appears to be bearing fruit.

Vinovalie exports have tripled over the last five years from two to €6 million euros ($2.6 to $8 million).

The growth comes as global consumption of wine is on the rise, driven by a growing taste for the tipple in Asia and particularly China, now the world's biggest consumer of red wine.

Between 2008 and 2012, the amount of wine drunk around the world increased by 3.23 percent, and that is expected to climb by another 4.97 percent by 2017, according to a study by Vinexpo and the British International Wine and Spirit Research think-tank.

In the United States, which has been the world's top consumer of wine since 2011, red wine consumption is expected to jump 14 percent in the next five years.

Christophe Haunold, of the INP, said it was important to preserve the character of the Vinovalie grapes — Malbec, Fer Servadou, Loin de l'oeil (also known as Len de l'El) and Negrette — while ensuring both quality and quantity.

"That required a lot of science and technology," he said.

"We sought to identify complex molecules, precursors of particular flavours… which appear and disappear depending on maturity to refine the optimal harvest time," he added.

INP used sophisticated chromatography — a laboratory technique that involves separating mixtures — to map the chemical identity of the different grapes and understand how the molecules that develop taste and aroma evolve during the vinification process.

Researchers also looked at the effect of heating grapes for different lengths of time and to different temperatures using a technique called "Flash Detente".

The process involves heating the grapes to about 82C before placing them in a huge vacuum chamber, where they are cooled.

The cells of the grape skins burst from the inside, making it easier to extract the tannins, a key element in developing the character of a wine.

So far Vinovalie has concentrated on two international brands — Astrolabe and Terreo — but another research project is also planned for 2015.

Such processes are decried by some traditionalists and must be carried out precisely: the prized blackcurrant aroma can swiftly turn to green pepper if not properly treated.

But Haunold defends himself against charges of sorcerer's apprentice excess.

"Everyone has understood that beer is a very technological — wine is too," he said.