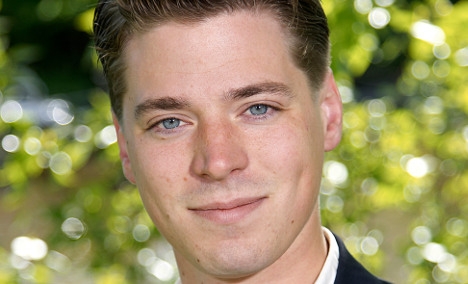 Hravn Forsne, the 25-year-old bidding to become a Swedish MP who says he's the son of François Mitterand. Photo: Moderaterna
Hravn Forsne, 25, is aiming for a seat in Swedish parliament as part of the centre-right Moderate party in the September elections.
The story, however, made waves in Sweden on Friday when Forsne revealed to a local newspaper that he was the son of France's longest serving president, socialist François Mitterrand, who ran the country between 1981 and 1995.
Mitterand fathered Hravn, who has dropped his original first name of Thomas, at the age of 72.
Forsne gave an exclusive interview with the local Kungsbacka-Nytt newspaper on Friday, in which he declared he is indeed the son of the former Socialist Party leader, who died in 1996 of prostate cancer.
"I want to be judged for who I am, not who my father was," he said. (In France the story immediately became front page news. Above is a screen grab from Le point.)
And when it came to his political influences, he added that it was more his journalist mother who shaped his political ideologies than his father, who he only met "five or six" times.
Forsne's family heritage had until Friday never been publicly confirmed, and as recently as 2012 his mother Christina Forsne refused to address the topic when probed by the Aftonbladet newspaper.
In the interview, she revealed that she had been in a 15-year relationship with the French politician stretching from 1980 to 1995, when she worked as a correspondent for a Swedish newspaper in Paris.
But when asked if Mitterrand was the father of Forsne, she responded "I'm willing to talk about my relationship with François Mitterrand. But I'll not talk about anyone else who is close to me."
According to some reports Christina once yelled out in the middle of the street near the Elysée Palace that she was François Mitterand's mistress.

Throughout the years French presidents have been well-known for having extramarital flings with women.

In fact Mitterrand, kept a whole second family on the go while married. He had a daughter, Mazarine, with his long-time mistress, Anne Pingeot. Both attended his funeral in 1996 alongside his wife, Danielle.

Forsne told AFP that he was speaking out because he believed it was important for voters to know his background.
"I will only speak about it to the local media, because it's important for them and for my fellow citizens, for the voters to know their candidate," he told AFP.
But he said he had no interest in becoming famous in France.
"I am a Swedish politician. And it's Swedish politics that interests me," he said.
Swedish media reports say Forsne, who lives in Kullavik in southwest Sweden, is in a strong position to win a seat in September, although opinion polls currently indicate an overall victory for the Social Democrat Party-led opposition.
On his party’s website Forsne says that “the barriers people face in their everyday life must be a priority” for politicians.

“I therefore believe we must work hardest for those who have the most difficulty,” he says adding that he wants to make Sweden “a stronger, better country”.

A version of this story first appeared on our sister site The Local Sweden.