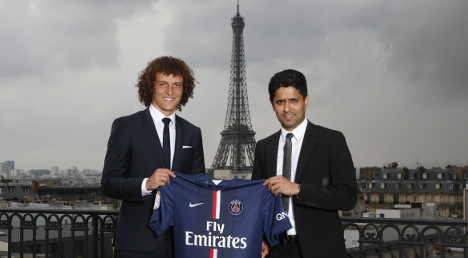 Paris Saint-Germain coach Laurent Blanc knows it will be difficult for his team to hit the ground running as they begin the defence of their Ligue 1 title away to Reims on Friday.

The capital club are odds-on favourites to win a third consecutive French crown and go to the Stade Auguste-Delaune fresh from defeating Guingamp 2-0 in Beijing last weekend in the season-opening Champions Trophy.

However, a quartet of key players will not be involved in Champagne country having only just started pre-season training after a post-World Cup holiday.

None of Argentina's Ezequiel Lavezzi or Brazil trio Thiago Silva, Maxwell and new signing David Luiz will be considered for selection against Reims as a result.

"This month is going to be strange because we have so many players coming back at different times and not everyone is in the same physical condition," admitted Blanc.

"We have done a lot of tiring physical work. The games in August will be difficult but we are not worried."

Reims, who finished 11th last season, have a new coach, with Jean-Luc Vasseur replacing Hubert Fournier, who has taken over at Lyon.

It is quite the baptism of fire for Vasseur, 45, who arrives from Ligue 2 Creteil and takes charge of a top-flight game for the first time against the club where he started his playing career.

"It is symbolic but I am thinking more than anything about my players. My job here is to take the team and the club forward. That comes before anything else," said Vasseur, who also began his coaching career at the Parc des Princes, working with the club's youngsters.

"When you have a game like this for the first match of the season there is not much I need to say to motivate the players.

While PSG have strengthened further with the recruits of Luiz and Serge Aurier, Reims have lost influential Polish midfielder Grzegorz Krychowiak to Spanish side Sevilla.

The most likely threat to PSG's supremacy continues to come from Monaco, despite a summer in which they have lost playmaker James Rodriguez to Real Madrid and last season's leading scorer Emmanuel Riviere to Newcastle United.

The principality club have a new coach in Leonardo Jardim, but after the lavish spending of last year, the 40-year-old Portuguese has yet to see any marquee signings arrive.

As they prepare to host Lorient – who have a new coach of their own in Sylvain Ripoll – in their opening game on Sunday, veteran defender Ricardo Carvalho is confident that last season's runners-up can enjoy another successful campaign.

"We have a new coach, with a different mentality and methods to those of (Claudio) Ranieri," he said. "Our pre-season has been a bit tiring. We have travelled a lot but we worked well.

"It is an advantage that we now know one another better. Two or three players should still join us but we are already stronger than last season."

There are seven matches on Saturday, with the pick seeing Marseille travel to Corsica to face Bastia in a meeting of two teams with new coaches.

OM's response to a poor last season was to overhaul their backroom staff with Argentine Marcelo Bielsa appointed as coach.

Bielsa, who has yet to give a press conference since arriving at the Stade Velodrome, has done plenty of experimentation on the field in pre-season, including using a 3-1-3-3 formation at times.

Bastia, meanwhile, have handed the reins to former Real Madrid and Chelsea midfielder Claude Makelele, who was assistant coach at PSG last season and makes his debut against the club he represented for one campaign in the 1990s.

Fresh from beating Grasshopper Zurich to qualify for the Champions League play-offs, Lille entertain promoted Metz, while Saint-Etienne go to Guingamp and Lyon's first game under Fournier is at home to Rennes on Sunday.