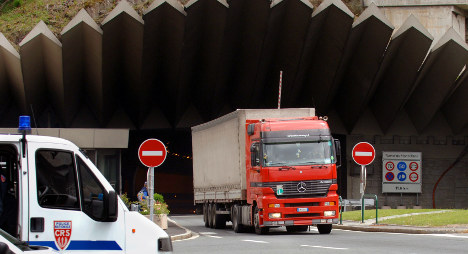 Mont Blanc Tunnel was closed due to a flood after a pocket of water burst, causing a river to overflow. Photo: Jean-Pierre Clatot/AFP

The tunnel was closed at around 9pm on Thursday night in both directions because of a “torrential flood” authorities said.

The cause of the inundation was attributed to the “rupture of a huge pocket of water” on the mountain that caused the River Creusaz to overflow.

Steps have been taken to line up all the lorries that are waiting to head through the tunnel.

“The technical teams are currently hard at work to make the necessary checks and help clear the traffic lanes as soon as possible,” said the Mont Blanc Tunnel operator GEIE-TMB, adding that no motorists in the tunnel at the time of the flood were harmed.

Drivers travelling from the Rhône-Alpes region to Italy had been advised to take the route via the Frejus tunnel instead.

At around 9am on Monday morning, authorities annpounced that the tunnel had reopened again.