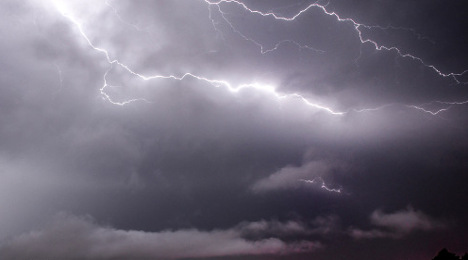 France is breaced for summer storms once again this weekend. Photo: Philippe Huguen/AFP

In all, the national weather service issued orange alerts – the second highest warning level – for 26 departments across the country.

“The weather will worsen significantly today,” France Météo said in a statement.

“These storms can in some cases become violent, accompanied by very strong winds and hail.”

The service said it expects two sets of storms to build up during the day. The first one will start in the morning near the Atlantic coast and gradually make its way across to the east part of the country. The second one is forecast to form just east of the Pyrenées mid-afternoon, reaching Auvergne, Rhône-Alpes and Bourgogne by Friday evening.

Forecasters say there will be gales of up to 120 km/h in parts of the country.

France has had a stormy summer so far, particularly on the west coast. But it is nothing compared to last year, when hail and rain devastated several vineyards in famous wine regions such as Bordeaux and Bourgogne.