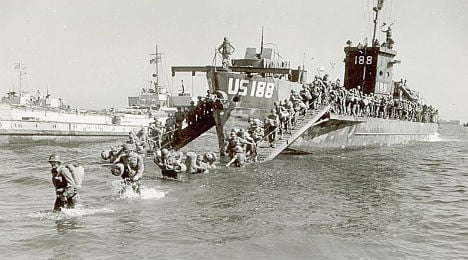 US troops take part in the allied landings in the south of France. Photo: Greudin/wikimedia commons

The landings that took place on the 15th of August at Le Muy, La Motte, and on the beaches of Cavalaire, St. Tropez and St. Raphael do not resound as much as those that happened in the North. Everyone has June 6, 1944 seared in their collective memory, and the landings on the Normandy Beaches of Juno, Omaha, Utah, Gold,  but Operation Dragoon (originally Anvil), as it was code named, tends to get overlooked – the forgotten campaign.

It was vitally important to capture the ports of Toulon and Marseille, freeing them as a supply route for the Allies' push up the Rhône to join the northern forces for the joint attack on into Germany.
One hundred thousand American, British, Canadian, Free French and Algerian forces sailed from Corsica, according to German intelligence, headed for the Italian port of Genoa, but during the night of the 14th of August changed course and headed directly for the French Mediterranean coast.

British and US combined parachute battalions – the 1st Airborne Task Force numbering at least 5,000 men – loaded in gliders took off from Italy and headed to the French south coast. Early in the morning of August 15th at 4am, they descended onto the rendezvous area north of the coast (code named Rugby) just slightly to the north of the villages of Le Muy and les Arcs and to the south of La Motte – the majority of them landing on target at Les Mitan near a wine domaine which is now called Les Demoiselles and not far from the large wine domaine of Chateau Roseline in Les Arcs.

Most of them were on target, but not all. Despite it being high summer in the south, on the night of the 14th there was mist – not an unusual weather event for mid-August – and perhaps  twenty percent of them drifted to the east, landing near the hill villages of Seillans and Fayence, from where they had to slog overland, fighting German resistance, to rejoin the main force.
The early morning of the 15th saw the first engagement as a small British party of paratroopers, numbering three or four, reconnoitered towards the vital Le Muy bridge, the key route for the sea borne forces.

They saw several Germans with American prisoners. Shouting "Get down!", they shot the Germans and continued with the Americans onto the Bridge – just in time as it was ready to be blown up. Meanwhile, early through the morning mist of the 15th, the main forces from the sea landed on the beaches of Cavalaire, Rayol, Ramatuelle, St. Tropez and St. Raphael (code named Romeo, Garbo, Alpha, Delta, Camel & Rosie) – the heaviest fighting taking place at St. Raphael (Camel), from where they began their march inland.

They marched either along the narrow coast roads, or uphill through narrow heavily forested hills and valleys, through scrub, holm oak and umbrella pines to reach the main highways to Toulon, Marseille and eventually the Rhone valley.

'They stepped into turquoise waters as they were shot at'

It must have been a totally surreal experience for young American soldiers to spend all night in landing craft, huddled together not knowing the future, and then landing on some of the loveliest, most idyllic beaches of the Mediterranean. They stepped into brilliant turquoise waters and onto fine yellow sands, as they were being shot at, to start marching up promenades furled in pampas bushes, palmetto palms and with high lovely palm trees waving overhead.

They slogged their way inland, up the Argens valley, liberating towns and villages as they went, the seaside villages were already putting out the flags: Le Muy, St. Raphael and Ste Maxime – the 15 – then Les Arcs, where there was fierce resistance until the Germans fell back to regroup, then 16 Draguignan, where a US private (see photo) ‘liberated’ the Nazi flag that was flying over Hôtel Bertin, the German HQ next to the Prefecture, 17 Vidauban, 18 Brignoles, and so on.

French-Algerian forces closed in on Toulon August 19th, just 5 days after landing and heavy fighting ensued. The Germans surrendered August 26th. The French had 2700 casualties but captured 17,000 Germans. Marseille fell August 28, 1944. There were many US, British and Canadian losses.

There are Commemoration Ceremonies in many of the coastal landing sites, where every year French Military and local Municipal officials lay wreaths in memory of the Allied forces. Memorial stones are to be found at these sites. The principal villages that featured in the campaign, as well as laying wreaths, put on events to celebrate. The memory of that day this region was liberated, is very much kept alive. Le Muy, a small village, but the first to be liberated – in particular really lets it all out. They host a troupe of re-enacters who get together every year and parade.

Anita Rieu-Sicart is the editor of the monthly magazine Var Village Voice. To read a full vesion of this article you can visit www.franceonyourown.com