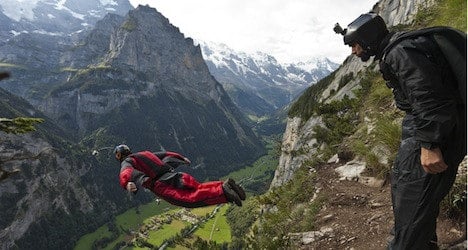 Two basejumpers were killed in separate incidents in France on Wednesday, putting the extreme sport back in the spotlight. Photo: AFP/file photo

Two people were killed while base jumping in France on Wednesday in separate incidents that both appeared to have been caused by parachute failure.

Unlike skydiving which involves leaping from an aircraft, base jumpers take off with a parachute from a fixed point, usually a cliff or a bridge.

The two incidents took place some 900 kilometres (550 miles) apart – one in the Alps and the other in the Pyrenees.

On Wednesday morning, a 34-year-old Swiss man living in the Mont Saxonnex ski resort was killed after jumping from a spot popular with base-jumpers in Haute-Savoie.

Firefighters said the man's parachute failed to open. He struck the cliff before hitting the ground, and was killed instantly.

The second victim was a 46-year-old man from Paris who jumped from the north face of Pic du Midi d'Ossau in the Pyrenees around midday.

Rescuers said the cause of the accident was also likely a problem with the parachute opening.

SEE ALSO: Basejumpers take to the City of Light's heights The man fell 700 meters (750 yards) and was found dead on arrival, according to firefighters.

The pursuit carries high risks. A Norwegian study published in 2007 concluded that base jumping is between five and eight times more likely than skydiving to result in injury or death.

The sport of basejumping and wingsuit flying is a contentious issue in France and was once banned by thr mayor of Chamonix because of the number of deaths.

Last summer saw a series of fatal incidents which led some involved in the sport to denounce risk takers for "confusing reality with video games".

Erich Beaud, who was the first man to perform a base jump off a cliff in France in 1989 has spoken of how the new wingsuits can be dangerous for inexperienced jumpers.

“Some people are confusing video games with reality. You don’t get a second chance in a wingsuit,” he underlinedTHere was also tragedy in the Queyras range of the French Alps on Wednesday when a 73-year-old French hiker fell to his death.