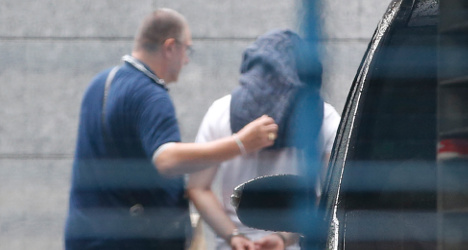 One of the two French narcotics police officer (R) placed in custody after being suspected of taking part in the stealing of over 50 kilos of seized cocaine. Photo: Kenzo Tribouillard/AFP

The 33-year-old officer, who has not been named, was formally charged with misappropriation of property by a public official and various drug-related offences. He was then remanded in jail in the case that has sparked outrage from politicians.

He denies any wrongdoing and has revealed little during questioning.

Despite a widescale search, there has been no sign of the drugs, which appear to have "vanished into thin air", according to sources close to the probe.

Police sources have said the stash has "not appeared on the open market".

The man was arrested Saturday while on holiday with his family in the south of France on suspicion of stealing the drugs, with an estimated street value of two million euros ($2.7 million).

Police seized nearly 20,000 euros in cash, mainly from a backpack he was carrying at the time of his arrest.

The suspect said he had won the money from online gaming.

In addition to the 20,000 euros, police also found several telephones and computers during their searches.

Authorities also questioned the officer's wife about the couple's unusual lifestyle, including ownership of seven properties in the Perpignan region, a source close to the investigation said.

Interior Minister Bernard Cazeneuve has described the allegations as "extremely serious" and said the officer had been temporarily suspended.

A second officer, who allegedly appeared on the bank account details of the prime suspect, was taken into custody for questioning on Monday.

The drug haul was seized last month and had been kept in a secure room in the police headquarters overlooking the Seine River close to the Notre Dame Cathedral.

Access to the drugs was tightly controlled, with security procedures requiring anyone entering the room to sign in and be accompanied by another officer authorised to have a key.

According to police sources, however, "there is no doubt that security at (police headquarters) is not ideal".

This is not the first time the Paris police has attracted unwelcome headlines.

In April, two elite French officers were charged with raping a Canadian tourist there in a case that sent shockwaves across France.

The 34-year-old woman said she was raped in the building after meeting the officers during a night of heavy drinking at an Irish pub.