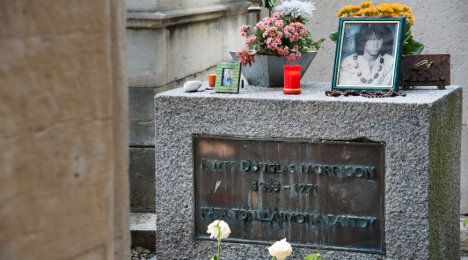 In an interview with Mojo magazine, Faithfull said her boyfriend at the time, Jean de Breteuil, a heroin dealer, gave the Doors frontman the drugs that ended up killing him.

Morrison was found in the bathtub of a Paris apartment on Rue Beautreillis in the 4th arrondissement in July 1971.

An autopsy was never carried out on his body and the exact cause of his death has been the subject of dispute over the years.

But Faithfull put it down to an accident over the strength of the drugs he was given that night.

“He went to see Jim Morrison and killed him,” Faithfull told Mojo. “I mean I’m sure it was an accident. Poor Bastard. The smack was too strong. Yeah. And he died.

“I didn’t know anything about this. Anyway, everybody connected to the death of this poor guy is dead now. Except me,” she said.

De Breteuil died at a later date in Morocco after also succumbing to a heroin overdose.

Morrison’s grave in Pére Lachaise cemetery in Paris is still a pilgrimage site for his fans across the world, who come from far and wide to visit his final resting place.