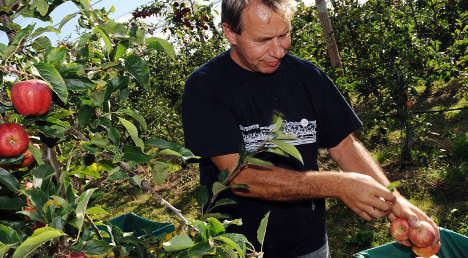 Country's around Europe were digesting the effects of Russia's trade embargo on EU's food exports on Thursday with the leaders of France's farmers unions saying the ban will cause a crisis on the European market.

Luc Barbier, president of the National Federation of fruit growers said the embargo would be "tragic" for France's fruit growing farmers.
"Russians will continue to eat apples,  tomatoes and peaches except that they will no longer come from Europe, they will come from Asia, Brazil and South Africa, etc."
"So when the market reopens, it will take years to regain share. It wil be tragic," he said.
Barbier told The Local the French agricultural industry is strained enough, and that unless the government intervenes to help already struggling farmers, the ban could send some of them into bankruptcy.
Xavier Beulin, the president of farmers union FNSEA, echoed the concerns.
“Russia is closing its gates to imports, but that also means that the products that were originally destined for Russia will end up on the European market and it will create a crisis situation," he told AFP.

The Russian import ban includes meat, milk and dairy products, as well as fruit, fish and vegetables. It targets all countries that have taken punitive measures against Moscow, including the US, EU members, Australia, Canada and Norway. The ban will last one year and is valid from Thursday.

According to agricultural website La France Agricole, France exported almost €1.2 billion worth of agricultural products to Russia last year,  which represents around 6.5 percent of France's total exports, according  to figures from 2012.

Most of these exports consist of muxury products like champagne which are not expected to be included in the embargo.

But other products will be hit hard, notably France's fruit growing industry.

French producers sent fruit worth nearly €26 million to Russia in 2012 and Moscow provides the biggest market for French apples and pears, of which 1.5 million tonnes are expected to be sent in the direction of Russia this year. Unions fear that it may take years to recover from an embargo.

France's Ministry of Agriculture said France is the world's eigth biggest exporter of "Agro-alimentaire" products to Russia and the fourth in Europe behind Germany, Ukraine and the Netherlands.

The Ministry declined to comment on the effects the ban would have on the French farming industry. A ministry source, however, told The Local the situation as “very delicate and very political”.

At Capital Economics in London, chief emerging markets economist Neil Shearing, commented that the impact of the Russian action was uncertain.

Although some countries, notably Lithuania, could be hit hard, the overall impact on EU exports would be small.

"It seems likely that the biggest loser will be Russia itself," he said.