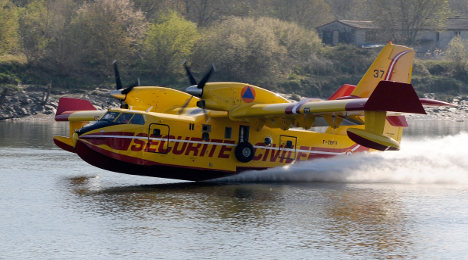 French water bombing planes have been sent to Sweden to fight forest fires, but their work has been hampered by too much smoke. Photo: Jean-Pierre Muller

French water-bombing planes sent to help Sweden fight a major forest fire have been hampered by too much smoke, according to reports on Wednesday.

"We're doing everything we can to get them in the air as soon as possible," NIklas Ekstrand from the Swedish Armed Forces told the Aftonbladet newspaper.

"The situation is far from perfect right now with so much smoke in the air. Right now, they can't take off with such poor visibility."

The planes, flown in from France on Tuesday, have been called in to help quell the flames as they are able to carry much more water than the helicopters Sweden has been using. Sweden owns no water bombing planes itself.

French planes are regularly sent abroad to help battle forest fires. In August 2012 two were sent to Portugal as forest fires raged across the country.

Two more planes are expected to touch down from Italy later on Wednesday.

The planes are able to fill up with 6,000 litres of water in just a few seconds, and can fly at 130 kilometres an hour. Pilots are planning to take the water from Lake Mälaren Lake Åmänningen.
Meanwhile, the fire continues to spread on its seventh day. The county council of Västmland announced on Wednesday morning that the forest fire, Sweden's largest of modern times, is still out of control but is no longer threatening the town of Norberg, just north of the fire.

Those who have already evacuated the town, however, are not permitted to return until emergency services give the signal.

Evacuated residents of the town of Gammelby, west of the fire, are now able to return to their homes, on the condition that they are prepared to evacuate again at a moment's notice and do not bring their animals back with them.

Our sister site The Local Sweden is constantly updating the latest news about the forest fires. CLICK HERE to keep up to date with what is happening.