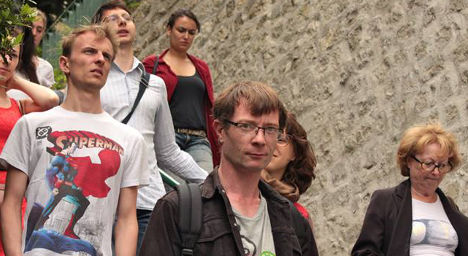 Homeless guide Vincent takes a tour group around parts of Paris. Most visitors are impressed, although not all cough up. Photo: L'alternative Urbaine

One year after its launch, the popularity of Paris’s homeless-guided walking tours has shot through the roof, with tourists and Parisians alike flocking to experience the “other side” of the French capital.

“When we started, we had one tour a month, but now we have at least five every weekend,” Selma Sardouk, the founder of the tour operator Alternative Urbaine, tells The Local.

“Our visitors come from all over the place. We have everything from foreign tourists to people who actually come from the neighborhood itself.”

Set up as an initiative to give homeless people the chance to get back into work by guiding tourists on the streets they once lived on, the association currently provides tours in various sized groups around Paris’s more down-to-earth 20th arrondissement in the northeast of the city. “It’s partly a scenic tour where we show them community gardens, beautiful hidden streets with little houses, and street art work, but it’s also historical where we take them to buildings that used to house factories and we tell little anecdotes about the sites,” she said.

As of September, the association will also start giving tours of the capital’s 18th arrondissement, which starts at the northern end of Montmartre.

While the tour guide earns a salary of €10 an hour, it is down to the visitors themselves to decide how much they want to pay. And some tourists have proved to be stingier than others.

Since its launch, the tours have helped two former guides back into the world of work. And in September, the association’s current guide, Vincent, will leave to pursue a training course.

“So at the moment we’re looking for a new guide,” Sardouk said.

Solidarity tourism, an ethical movement that combines volunteering and tourism that helps develop the local community, is also popular in other major European cities. So far, homeless guided tours are also offered in London, Barcelona and Prague.