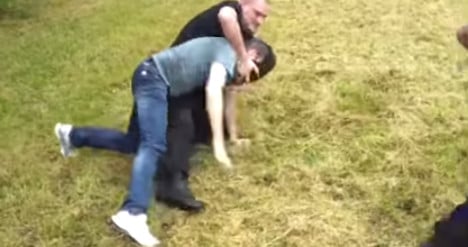 French newspaper Le Canard Enchainé revealed on Wednesday that the Socialist Party is deeply worried over commando training camps, videos of which appeared on the website of far-right polemicist Alain Soral.

According to the site the courses are aimed at helping participants become a "responsible citizen" but rather than being like a scouts training camp, a video posted on Soral's website “Egalité et Réconciliation”(equality and reconciliation) shows "students" engage in combat, using knives and firearms.

Although they are also taught first aid, which may come in handy given the other types of training they receive on the courses that cost €200 and take place in the forest of Fontainebleau. They are run by a group named "Prenons le Maquis"

Soral is well known in France for being the author of several controversial essays.

In 2007 he became a part of the far-right Front National’s “central committee” before leaving the party two years later.

One of Soral’s courses is planned to take place at the August but France’s Socialist Party may step in to prevent it from taking place.

In a statement the party said: “We are concerned to see this violent movement, which is ideologically and politically extreme right-wing, organizing training camps in the forest of Fontainebleau under the pretext of returning to nature.”

The party also called on the government to “be extremely vigilant".

The growth in support of the far-right in recent months has led to alarm bells being sounded among mainstream political parties.

In March, the far-right party led by Marine Le Pen won 11 mayorships in France’s local elections and two months later came top of the French polls in the European elections.