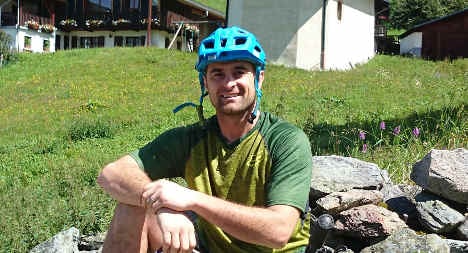 Alaistair Jamieson, who has been told he cannot work in France because he doesn't have the correct qualifications. Photo: A Jamieson

Brit Alistair Jamieson, 36, who runs mountain biking holidays in the Alps, has been banned by the authorities from working in France and threatened with jail and a €15,000 fine if he flouts the order.

Despite Jamieson's claims that he has all the necessary qualifications, bureaucrats in France say his UK qualification is "inadmissable" and therefore is working illegally.

Jamieson's run-in with the law comes after the high profile case of British ski instructor Simon Butler, who was fined €30,000 by a French court in June for teaching without the appropriate licence.

The secretary of the European Confederation of Outdoor Employers (EC-OE) told The Local on Tuesday that Jamieson, like Butler, was another victim of French civil servants seeking to maintain a “monopoly”.

“This is what we call in French law an abuse of power," said Frenchman Jean-Yves Lapeyrere.  “Their agenda is to keep their monopoly of certification [from the Sports Ministry] over France.”

“If they recognized the qualification of Mr Jamieson they would break their monopoly and open a door they do not want to open. It’s not really a legal issue, it’s a political issue.”

The EC-OE is preparing joint legal action with Jamieson and his 14 employees, many of them Brits, as well other sports holiday professionals, including Simon Butler. (Simon Butler, pictured in the middle, outside a court in France)

Despite having the highest-rated British ski instructor's licence, Butler refused to obtain qualifications needed to teach in France, in the face of repeated convictions and fines.

Butler, a skier with 30-years experience, said France's refusal to recognise British certificates violated EU laws on freedom of movement, in particular a 2005 directive on Europe-wide recognition of qualifications.

The argument is at the heart of the cases being prepared by the EC-OE, a grouping of the national associations of outdoor activity companies from 13 countries.

“There is nothing wrong with the EU directive or with French law,” Lapeyrere said. “The problem is with some French civil servants who are under pressure from French lobbyists.”

'I have a commitment to my customers'

Jamieson has been told he must report to local police in the resort of Les Arcs in the Savoie region and that he risks imprisonment if he continues to work without an official permit.

Jamieson, whose business "Trail Addiction" offers guided mountain biking trips to around 500 customers each summer, has been working in France without an official permit for more than a decade.

“I believe I’m legally allowed to work in France and that’s why I will continue working,” Jamieson told The Local. “I’ve got a commitment to my customers.”

“It’s always the same pattern,” Lapeyrere said. “The guys declare themselves and then the French threaten them.”

The EC-OE is studying the cases of a total of 50 foreign outdoor sports employers and employees in France, including Belgians, Portuguese and Dutch as well as Brits.

“The civil servants make it so complicated,” Lapeyrere said.

“A lot of Brits have given up or have done what the French told them to without realizing it wasn't actually legal.”