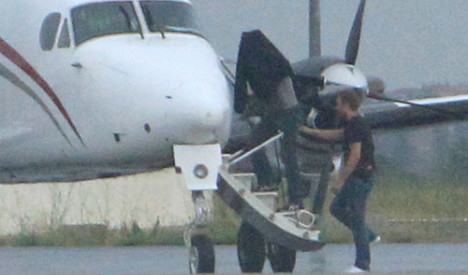 A police officer arrested while on holiday as part of a probe into a missing 52 kilos of cocaine is escorted onto a plane. Photo: Raymond Roig/AFP

Police investigating the theft of 52 kilogrammes of cocaine from their own Paris headquarters have seized nearly €20,000 from the chief suspect, a drug squad officer, a source close to the probe told AFP on Monday. On the same day a second cop was detained in connection to the probe.

In what has become a major embarrassment for the Paris police force, the 34-year-old officer was arrested on Saturday on suspicion of stealing the drugs, with an estimated value of two million euros ($2.7 million).

He was picked up while on holiday in the southern city of Perpignan. "Most of the money seized was in the backpack he was carrying at the time," said the source.

The officer continues to deny the accusations and said the money came from online gaming. The drugs are still missing.

His detention has been extended beyond an initial period of 48 hours, the source said.

In addition to the 20,000 euros, police also found several telephones and computers during their searches.

The officer's wife was also questioned by police and asked about the couple's unusual lifestyle, including ownership of seven properties in the Perpignan region, the source said.

Interior Minister Bernard Cazeneuve has described the allegations as "extremely serious" and said the officer – who has not yet been named – had been temporarily suspended.

Cazeneuve ordered a "thorough and rigorous" audit of the country's drug's squad on Monday.

A second unnamed police officer was placed in custody Monday as part of the investigation, a police source said, confirming a television report.

According to BFM TV, the second suspect, was picked up after his name appeared on the bank statements ofthe arrested officer. BFM TV also claimed police were looking into whether a third officer was also involved.

The drug haul was seized last month and had been kept in a secure room in the police headquarters overlooking the Seine River close to the Notre Dame Cathedral.

Access to the drugs was tightly controlled, with security procedures requiring anyone entering the room to sign in and be accompanied by another officer authorised to have a key.

According to police sources, however, "there is no doubt that security at (police headquarters) is not ideal".

Authorities are checking to see whether there are accomplices, either within the force or external.