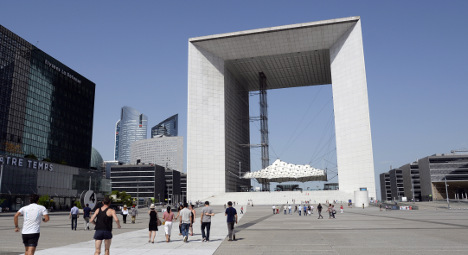 The Grande Arche, where Margaret Thatcher once got stuck in the toilets, has fallen into disrepair. Photo: Bertrand Guay/AFP

Today, the gigantic Grande Arche on the outskirts of Paris is in a sorry state – the prized Carrara marble covering parts of the structure is worn down, businesses snub its cramped office space and the entire building is now closed to the public for security reasons.

This 20th-century version of the French capital's Arc de Triomphe – a glass and marble cube so big it could house Notre-Dame Cathedral – stands in the business district of La Defense outside Paris at the end of a long,
straight axis that begins at the Louvre museum and takes in the Champs-Elysees.

Danish architect Johan Otto Von Spreckelsen conceived the project, but an illness forced him to hand over the reins in 1986 to France's Paul Andreu.

The building was inaugurated on July 14, 1989, with a three-day G7 summit attended by top leaders from around the world including Thatcher.

Britain's then-prime minister "no doubt long remembered her visit," said an official who was present on that day, who asked to remain anonymous.

"A door handle broke and she got stuck in the toilets. Her bodyguards were forced to break down the door."

Today the Grande Arche is a shadow of its former self.

The base of the cube's north face has been cordoned off for safety reasons and on the south side, some of the marble has been replaced by granite, a more resistant material.

The rooftop offers an unrivalled view of the Champs-Elysees, the Concorde square and the Tuileries Garden that leads on to the Louvre – but has been closed to the public since April 2010 because of an elevator incident.

The ecology and housing ministries based in the south face of the Grande Arche have narrow corridors with no natural light and cramped offices with low ceilings.

The place is "a little hard-going", Andreu acknowledged.

"We had big restrictions: to erect a 'modern Arc de Triomphe' in line with the historical axis that crosses Paris from east to west," he said, referring to the straight line stretching from the Louvre to the Grande Arche.

"The exterior was favoured over the interior."

From October, both ministries are launching big renovation works that will cost nearly 200 million euros ($270 million) over two years and will improve insulation, optimise space and replace all the marble.

But the future of the north face where much of the office space is empty is more uncertain.

Real estate group Jones Lang LaSalle has had to reduce the rent, charging €320 per square metre per year compared with an average of €400 in the rest of the district.

Reopening the rooftop, which was once visited by tens of thousands of tourists every year, is also an option, though nothing has been done so far.

"But the idea of reopening has never left us," says Michel-Regis Talon, a spokesman for the ministries.