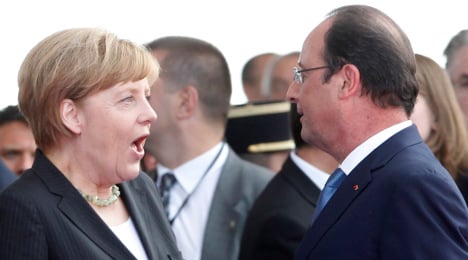 Has Hollande just mentioned the word "growth"? The French president wants the Germans to do more to boost the eurozone. Photo: Christophe Ena/AFP

The French president took the opportunity during the weekend's World War I commemorations to remind Germany of its responsibility in helping ease the eurozone crisis.

In an interview with Le Monde newspaper, Hollande asked Germany to demonstrate “stronger support for growth” and expressed support for a “shared responsibility” on the fiscal front.

“The pace of the efforts to reduce the deficit also depends on the growth. The business and financial situation in Germany allows it to invest more. This is the best service that Germany can provide for France and for Europe,” Hollande told the French daily.

Ever since being elected in May 2012, Hollande has long championed the need for stimulus measures to help boost growth and ease the pain on Europe’s beleaguered economies.

But he has failed to convince Chancellor Angela Merkel who, throughout the Eurozone crisis, has advocated the need for fiscal discipline.

The opposing views have at times lead to strained relations between the pair.

“If poor growth weighs on fiscal revenues, then a week inflation also negative budgetary consequences on revenues, as well on the debt,” Hollande continued.

“A lot will depend on the level of the euro, which has declined in recent days, but still not enough,” he said, before adding that Germany’s Bundesbank is “aware of this problem”.

Hollande also said the “European Central Bank needs to take all necessary measures to inject liquidity into the economy”.

The struggling eurozone's policies have not delivered economic rewards and there is a real risk of deflation, French Prime Minister Manuel Valls said on Friday.

"The economic policies of the eurozone are not effective," Valls said, adding that they "sadly take a long time to have an effect".

"There is a real risk of deflation," Valls said "because at the European level, growth and inflation are lower than what we might have expected".

French and German leaders are set to square up at two upcoming meetings in the coming weeks, where they will have a chance to air their views.

On August 30th, Hollande will receive the German Vice Chancellor Sigmar Gabriel at the Elysee Palace and on September 22nd, Manuel Valls will travel to Berlin to meet Angela Merkel.