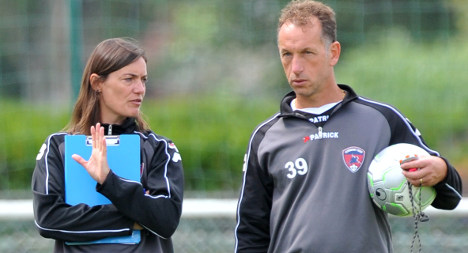 She’s the woman everyone in football is talking about on Monday.

She’s about to make her historic debut as coach of French Ligue 2 side Clermont. It’s historic because Diacre will become the first woman to lead a men's professional team in amajor European country when she takes her team to play Brest.

Great, how did she get the chance to make history?

Basically Clermont’s courageous/publicity hungry owner Claude Michy seemed intent on breaking the mould this summer by appointing a woman as coach. Diacre was not even his first choice. Earlier in the summer, the woman who was all set to make history was Portuguese coach Helena Costa. But after making global headlines when she was appointed by Michy, Costa abruptly resigned just a day before taking over the reins.

Costa never even took charge of training session as she walked away after complaining that the club was signing players without consulting her.

Michy, however was undeterred by the set back and set out looking for an adequately qualified female replacement.

He popped for Diacre the former assistant coach to the French women's national team. Does he really want to promote women in football or is it just a publicity stunt?

Well, as you can imagine the appointment has generated a few headlines for Clermont around the world and Michy would not be upset by that. When announcing Costa’s appointment the owner was forced to dismiss suggestions that his move was a publicity stunt and said that he had "chosen a coach first and foremost, not a woman".

When Costa resigned Michy said he would name a new coach “male of female”, but when he opted for another woman, many accused him of just seeking publicity.

When asked outright if it was a publicity stunt, Michy told BFM TV: “Everyone understands it like that, because the world is formatted that way. As soon as you do something different it’s seen as a communications stunt. In reality it’s the media who have taken this view. It’s the result, but it wasn’t at all the purpose of the appointment”.

How’s Diacre feeling ahead of the big day?

"There is serenity," she said on Monday morning in a video press conference on the club's website.

"There will be some excitement but I'm trying not to get polluted by that," added Diacre on the day she turned 40.

"I'm trying to maintain my focus as much as possible and to stay as much in the shadows as possible because what interests me is that my players take the limelight, not me."

The former assistant coach to the French women's national team said she wants to deflect the media attention away from her as quickly as possible.

"I think all this interest is over the top with regards to my presence, what I'd like is for us to concentrate on Clermont," she added.