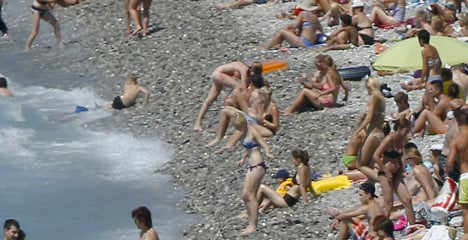 The steap beach at Nice at the French Riviera is causing a few problems for swimmers. Photo: Valery Hache/AFP

The pristine Mediterranean sea at the resort of Nice is normally irresistible at this time of year, but there are plenty of people thinking twice about taking a dip.

That’s steep pebbled beach leading down to the water has become so steep that the usually chic beachgoers are having to crawl on their hands and knees to get back to their sunbathing spot.

The paper spoke to 72-year-old American tourist named Caryl, who struggled to get out of the water.

“I’m not used to having to climb out of the sea. It’s difficult for me,” she told the newspaper.

One concerned person wrote to the newspaper to raise concerns about the risks of “sprains, fractures and even drowning” for those trying to get out of the sea.

Some have even suggested ropes should be installed to help people get out of the water,  like those in place on nearby private beaches.

The problem has apparently arisen due to a combination of erosion and big waves.

Authorities have insisted they do their bit to make it easier for swimmers by levelling the beach using bulldozers at five am each morning.

But unfortunately by the time sunseekers descend on the beach by the afternoon the waves have had enough time to recreate the steep pebbled slope down to the water.