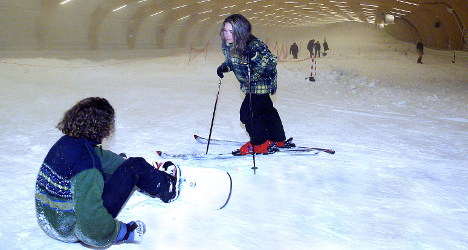 There are plans on the table to build a €50 million ski resort on the outskirts of Paris. Photo: Philippe Huguen/AFP

A new indoor ski complex could be built on the outskirts of Paris that would welcome ski-enthusiasts all year round, according to reports this week. Although entrance would not come cheap.

French newspaper Le Figaro has revealed that the Dutch company Snowworld plans to build the centre on the 230-metre high man-made hill at Elancourt, in the department of Yvelines, to the west of Paris.

According to reports the Snowworld centre would include 22, 000 square metres of pistes between 100 metres and 320 metres long, a chair lift, toboggan slopes and a three star hotel and "altitude" restaurant.

The local mayor is right behind the plan, insisting that it will provide a much-needed boost to the local economy at zero cost to authorities.

“The complex could lead to the creation of 200 jobs,” Jean-Michel Fourgous said. “This hill has not been exploited for 30 years. It’s a beautiful site, which given the elevation and relief, lends itself to sports.

Plans are at early stage but the mayor said he was initially cool on the idea but warmed to it after consulting local residents.

However for anyone who fancies a bit of summer skiing or who can’t afford to get to the Alps, a session on the artificial slope at Snowworld won’t come cheap.

The company envisages charging €52.5 per person for the ski pass and hiring of equipment, to help repay the €50million it plans to invest in the site. But Mayor Fourgous says there will be cheaper tariffs available to locals.

However not everyone it seems is in favour of a ski station on the edge of Paris, with one former mayor of a town in the region arguing that most people residents living nearby will not benefit from the complex.

"What's the interest in skiiing in a tin?"

“I regret that the only studies that have been carried out over how this hill can be best exploited are devoted to leisure-business projects for a small elite,” Alain Le Vot, a former mayor of a nearby town told Le Figaro.

“What is the interest of skiing in a tin? The people who have the money to go to this ski dome can simply go to real ski resorts within a few hours of the capital by TGV,” Le Vot said.

There is also opposition from a local resident’s group, who have named themselves “La Colline de la Revanche”(Hill of revenge). The group has blasted the “high-engergy” using project that would “degrade the landscape and ruin the biodiversity necessary for life”.

Local Green party member Olivier Pareja, dismissed the project as “refrigerated warehouse at minus 5°C in summer and winter” that would consume “delirious” amounts of energy.

According to local estimates the total amount of energy used would reach 48 million kwh.

Snowworld operates other indoor ski-slopes around Europe and is reportedly planning to open one in Barcelona.

In France the first indoor ski dome to open up was is Amneville, in the east of the country. It welcomes 450,000 through its doors each year, although according to recent local reports, it is struggling financially.

What do you think of the project? Does Paris need an indoor “ski resort”?