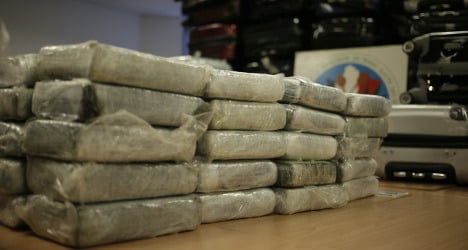 The case of the missing 52 kilos of cocaine continues to embarrass French authorities on Monday with the interior minister Bernard Cazeneuve announcing that “a rigorous and thorough” audit will be carried out of the country’s drug squad.

The story of the missing drug haul has gone global and left authorities in Paris slightly embarrassed to say the least.

On Monday Cazeneuve tried to limit the fallout by telling Le Parisien newspaper that he wanted “methods, procedures and professional practices” to be scrutinized.

On Sunday a 34-year-old French narcotics police officer was arrested Saturday on suspicion of stealing the drugs, which have a street value of up to €2 million.

Security cameras spotted a person resembling the arrested officer entering the headquarters with two bags, according to a statement from police and prosecutors.

The officer, who works with the Paris drugs squad, was arrested near Perpignan close to the Spanish border where he was on holiday.

The drug cache was seized in a Paris raid in early July and was being kept in a secure room in the police headquarters, which overlook the Seine river close to the landmark Notre Dame cathedral.

On Thursday, police learnt the drugs had gone missing.

The haul had been kept in a high-security area, with security procedures requiring anyone entering the room to sign-in and be accompanied by another officer authorised to have a key.

A number of elite police officers have been grilled by a team from the national police's internal affairs division over the incident.As the drugs squad, called the “brigade des stupéfiants” or “les stups” for short, comes under scrutiny the Cazeneuve insists that he has faith in the police.

“I want to say that I have trust in all those who serve with courage throughout France and often put their lives in danger,” he said.