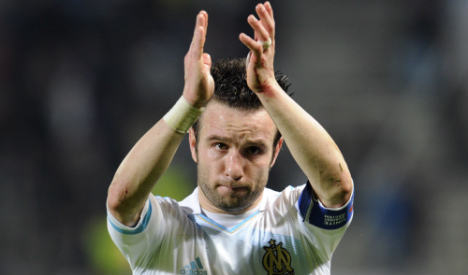 Dynamo announced on their Twitter feed that Valbuena had signed a three-year deal in the Russian capital.

The confirmation came after a Marseille director, speaking before his team's friendly against Italian club Chievo in southern France, told journalists that Valbuena had departed for a transfer fee of €7.5 million ($10m).

"Dynamo have a very interesting project and I'm happy to be a part of it," Valbuena told Dynamo's website.

"The club's ambitions match my own and I'm looking forward to making my debut and to helping the club achieve their goals for the season."

The 29-year-old Valbuena, who underwent a medical earlier on Saturday, will reportedly earn 10 million euros (£7.9m, $13.4m) over the course of the three-season deal.

Valbuena has won 38 caps for France, including featuring in four games during Les Bleus' run to the quarter-finals of the World Cup in Brazil last month.

Dynamo president Boris Rotenberg said: "We are hoping that his high class will help take the club on to the next level."

Valbuena joined Marseille in 2006 and helped the south-coast side win the Ligue 1 title in 2010, but OM have been open to offers for Valbuena and other leading players as they look to cut costs after failing to qualify for this season's Champions League.

Dynamo finished fourth in the Russian Premier League last season and face Hapoel Kiryat Shmona of Israel in the second leg of their Europa League third qualifying round tie next midweek.