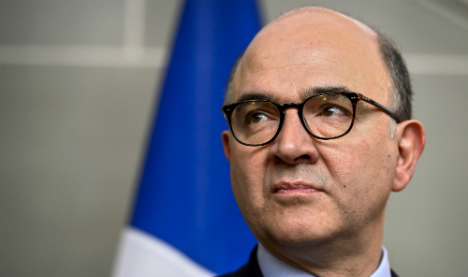 Moscovici told news weekly Der Spiegel that accusations from Berlin that he is a spendthrift who would soften the euro "like French brie" were flat wrong.

"We initiated key reforms during my time in office, we reduced deficits, we reduced labour costs," he said.

"And I didn't take a single important decision without coordinating with my friend Wolfgang Schäuble," his German counterpart.

Officials from Germany's ruling conservatives have called Moscovici unqualified to become the EU's powerful Economic Affairs Commissioner because of his frequent calls to loosen the terms of the bloc's stability pact on fiscal discipline.

A columnist for Germany's top-selling Bild recently railed against Moscovici, saying he called for "creating even more debt to give the economy a boost".

"Remember: Moscovici made the euro as soft as French brie with his talk as French finance minister."

"This kind of style should really be taboo considering the close ties between Paris and Berlin," he said.

Moscovici insisted that France had never "explicitly demanded" the EU economic brief and said the decision rested with Jean-Claude Juncker, president-designate of the next European Commission.

Spiegel said that while Germany had serious reservations about giving Moscovici the economic job, it could live with him taking on other responsibilities such as promoting growth policies and investment.