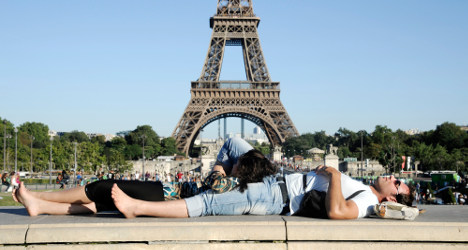 Is Paris in August heaven or hell? Photo: Bertrand Guay/AFP

For The Local's Ben McPartland the month of August delivers to him, once per year, the Paris of his dreams. One with fewer Parisians and a slew of cultural events.

But for his colleague Joshua Melvin there's really no good reason to stay and sweat in Paris in August, especially when the rest of France is out there waiting for you.

Melvin explains why it's time to go:

You'd have to be crazy to stay in Paris in August on purpose.

First up there is the weather. You get the nasty one-two punch of stifling heat and suffocating humidity, which does little to improve the already uncertain hygiene of metro-riding regulars.

The question is why the hell you would stick around here and sweat, when you can sweat at the beach?

Or how about the mountains, the country or any of the other places the 80 some million foreign tourists cross oceans and get visas to see every year in France.

This country has given its privileged residents the, admittedly at times difficult to manage, gift of five weeks of vacation. For god's sake use them outside of the city.

I agree it’s nice to have a slower, quieter Paris to yourself, but it remains unclean, harried and covered in stone, steel and asphalt no matter how many people are here.

Also, there is so much to see in France that I find it wasteful to not get out during the one time of the year when it’s permitted, if not encouraged.

I won’t bore you with my personal bucket list. Suffice to say there’s really too much history, hedonism and oddity out there to miss in an effort to remain loyal to poor Paris plages.

There is one thing, however, I will miss when I leave the city tomorrow morning for two weeks: the tourists. Yes, their slowness and tendency to travel in mobs can be annoying on public transit or narrow sidewalks.

But because the City of Light draws people from everywhere you get a sample of the world’s cultures delivered to you. And August is decidedly peak season for people watching.

I’ll get over it though. My consolation prize is the ocean, the sand and a moment with the rest of this country that remains such a mystery to me. The Local staff writers Joshua Melvin (left) and Ben McPartland (right) battle it out over Paris in August.

For McPartland August is the one month you should probably avoid leaving the City of Light:

There's a famous, oft-repeated quote that goes along the lines of “Paris would be a great city without the Parisians.”

While that is clearly a bit harsh on the locals, anyone who wants to know if it's true should come to Paris in August.

Think of everything in Paris that you can't do at other times of the year — get a seat on a terrace, get a seat on the metro, find a bit of green space in a park, etc.

Well in August you can do all these things.

And remember in August Paris is probably the only place in France, that won't see traffic jams.

While Melvin is sitting in his sweltering car in a traffic jam leading to a packed beach, overrun with Parisians, I'll be whizzing through Paris on a Velib' with the roads, pretty much, to myself.

Then think of everything that goes on in Paris in August. There's Paris plages for starters, with real sand and no chance of getting bitten by jellyfish, unlike on the Riviera.

There's also outdoor pools for when it gets too hot.

Some may complain about having to work while everyone else is away, but they miss the point.

In August, your boss is likely to be on beach, your colleagues too, so you can get away with doing pretty much 'rien'!

The pace of life slows, stress levels are reduced, the Parisians that are left smile at each other and even exchange small talk.

OK there's the hordes of tourists, but they are easily avoided if you stay clear of the hot spots.

While Melvin rightly asks why you would stay in Paris, when you can go to the beach in August, I say the beach will still be there in September, even October, when you'll appreciate getting out of the City of Light a lot more.