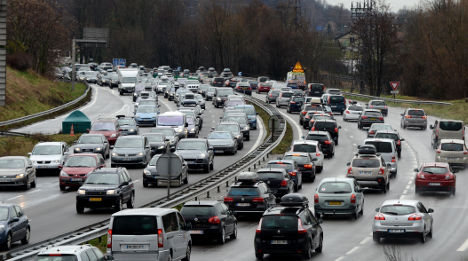 Stay off the roads in France this weekend, unless you need to travel that is, in which case prepare for delays. Photo: AFP

Even by Friday afternoon there were reports of over 250km of traffic jams on motorways across the country, including 96km worth of tailbacks in the Ile de France region.

Saturday has been judged as level “black” by the country’s traffic watchdog Bison Futé, which basically means – expect traffic jams and long delays.

The reason why Saturday is expected to be so bad is because France’s summer holidays are staggered depending on the regions, so this weekend will see July holidaymakers returning from the beaches while August holidaymakers head in the opposite direction.

Tolls on motorways leading to the south of the country are expected to see long tailbacks.

Bison Futé says there will be delays on the A86 A6b around Paris which lead onto the A10 and A6, the two main motorways that head south.

On Sunday it will be the roads leading back into cities that are expected to be jammed. The day has been judged as level “orange” by Bison Futé, which is warning of heavy traffic and potential delays on the A13, 186, 16 and A10.

Motorists are also being advised to avoid Ile de France between 8am and 5pm on Sunday.

Driving in the south west of the country on Friday would be made more complicated by the fact that nine departments have been placed on orange alert.

There will also be travel chaos at airports, after Air France ground staff are due to go on strike.