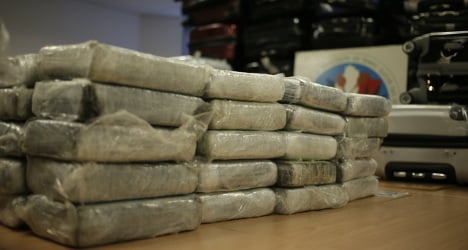 Paris police are looking for 51 kilos of cocaine they have lost. Photo: Kenzo Tribouillard/AFP

If you happen to stumble across a pile of cocaine bricks on your visit to the French capital this summer, the Paris police would be pleased to hear from you, after they seem to have misplaced nearly 52 kilos of the drug.

The Prefecture de Police had the estimated €2.5 million worth of cocaine stored under lock and key at its famous headquarters at 36 quai des Orfèvres, which has been featured in numerous crime novels and movies. The haul was last seen on July 23rd, French daily Le Parisien reported.

But recently the cops realized it was missing and on Thursday night the national police’s internal affairs division (IGPN) was at headquarters looking for the dope with the help of drug sniffing dogs. So far they’ve come up with nothing.

The narcotics squad seized the coke on July 4th in Paris after busting up a major trafficking operation, which they were quite proud of. But now they don’t know if they have simply misplaced the drugs or if someone has stolen them.

“This investigations will look into the whether applicable rules were followed for the management of evidence in the offices of this brigade and in general at 36 quai des Orfèvres,” the prefecture wrote in a statement. “If the investigation shows that the law has been broken… very firm measures will be immediately taken.”

The cocaine was stored in a secure room at the police headquarters but there was no close circuit television in the area. A source close to the investigation said only three people had keys to the room.

Many of those working there told AFP they were astounded at the disappearance and said they did not believe it was pilfered.

“It will be a thunderbolt if theft is proved,” said one police source.

The incident comes just months after two elite Paris police officers were charged with rape after allegedly taking a Canadian tourist back to headquarters and sexually assaulting her.

Two members of the BRI unit that fights gang crime met the woman during a night of heavy drinking at a nearby Irish pub frequented by many officers from the headquarters. The officers say she agreed to follow them to their workplace, which lies just across the Seine from the pub in the popular tourist Saint-Michel district.

Once there she alleges she was raped. The investigation into the incident is ongoing.