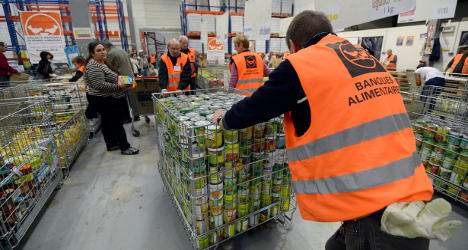 French lawmakers are trying to make it illegal for big supermarkets to throw away food. Photo: Anne-Christine Poujoulat/AFP

A typical French supermarket throws away some 200 tonnes of food every year, but a new piece of legislation aims to make that sort of waste illegal.

Sixty-three elected officials from across party lines filed a bill on Wednesday that would force so-called “hypermarkets” of 1,000 square metres or more to donate out of date food to charity instead of tossing it.

“With logistical resources and a stockpile of products, supermarkets can more easily make donations than individuals,” signatory and National Assembly member Jean-Pierre Decool of the conservative UMP party told French daily Le Monde. “A more systematic, even mandatory, approach should be added to this process by changing the legislation currently in force.”

Though households are responsible for most of the food wasted in the European Union, accounting for some 42 percent of what is thrown away, five percent of the waste still happens at big supermarket stores.

To highlight that waste a Frenchman ate his way across Europe this summer entirely on food he pulled out of dumpsters or was given by supermarkets. He was aware of the problem of waste before he left on the 3,000-mile trip to Warsaw from France, but the scale of it surprised even him.

"I really didn't imagine we were wasting as much as we are," he told the The Local previously. "Even when you know about it, it's still surprising to open a garbage can and find so many potatoes, so much fruit, yoghurt, sometimes 500-litre or 1000-litre bins are filled with things that are still good enough to eat."

Despite the scale of waste, this bill is already facing opposition. French retailers don’t like the idea of being forced to hand over their food, noting they already account for 30 percent, or 32,000 tonnes, of food donations in the country each year.

Who's going to cover cost?

Food banks, which would be responsible for picking up, storing and handing out all the goods, are also a little wary of the idea.

“The questions about the logistics of picking up all these donations and carrying out the distribution and following hygiene rules still need to be resolved,” Maurice Lony director of French Food Banks told Le Monde. “Who is going to pay for all that?”

Decool, the lawmaker, hasn’t addressed these questions fully in the French press, but he believes the law gives exactly the type of push France needs right now.

“From time to time, you have to give a little push. They (supermarkets) don’t all (donate), probably out of routine and because this would add extra work,” McCool told French paper Journal du Dimanche. “This legislation will, however, have a cost.”