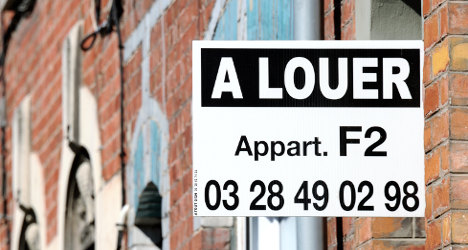 One of the costly realities of renting an apartment in France is the payment of so-called “agency fees” when, as nearly everybody does, you find your future home through a real estate agency.

The cost is generally the equivalent of a month’s rent, but as it stands, there is no law limiting them so agencies can charge whatever they want. And given that finding an apartment in Paris is about as tough as getting a taxi after dark, most people just pay up.

Things will change starting this autumn when this update of France’s rental access and urban planning law (ALUR) takes effect. From September 15 fees will be set according to the size of the apartment and where its located.

For people living in Paris and the some 60 towns in its suburbs, the fee will be €12 per square metre, in the 28 smaller French communities which still have a population north of 50,000 inhabitants it will be €10. Everywhere else in France the cost will be set at €8 a metre.

However, the new law will also allow agencies to charge renters for move-in inspections, which presently is illegal, unless a third party has be to be brought in due to a dispute. Starting in September inspections will cost you €3 per metre anywhere in France.

The result is some people will be big winners, seeing the fees drops by upwards of 50 percent, and others could end up actually paying more. But as there are quite a few variables, the impact of the changes need to be figured on a case-by-case basis.

For example, if you rent a 40-square-metre place in Paris for €1,100 a month, the new rules would cap your fees, inspection included, at €600. It amounts to a 45 percent decrease, which is money you’ll probably need to keep up with the ever increasing rent.

However, if you live in Bordeaux the news isn’t so good, in fact it could be bad. Because Bordeaux is subject to the lower maximum charge — €10 per metre — a 45-square-metre place rented out at €543 a month would come out to €585 in agency fees with the inspection costs.

So in this hypothetical case a renter would actually be paying than under the provisions of the new law. Thus the rules may not end up being such a good deal for everyone.

For what it's worth, renters aren't the only ones suffering from outrageous expenditures on real estate in the capital.

Even with the one to five percent drop in real estate prices brought on by the stagnant economy, a fairly small 56-square-metre flat in Paris’s 4th arrondissement will set you back a mere 20.5 years of pay, a study found earlier this year.

The study from France's national union of real estate agents, FNAIM, that shows workers in the City of Light spend most of their cash on housing.

FNAIM's study says inhabitants in the capital have to spend three to four times more of their wages on a buying a home than those living in other parts of the country.

PARTNER CONTENT
Thinking about selling your property in France? Here’s what you need to know
Url copied to clipboard!