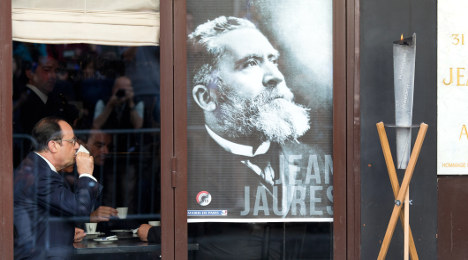 Who is Jean Jaurès?

Only one of France’s greatest political heroes, who is seen as the founding father of the Socialist Party, and a great pacifist who fought to prevent the outbreak of World War One. Basically he’s the man who François Hollande and co in the Socialist government all take their inspiration from, even if many critics claim Jaurès, who founded communist newspaper L’Humanité, would be horrified by some of the policies the current president has adopted.

Why is he all over the French news on Thursday?

On this day exactly one hundred years ago, Jaurès was sitting in a Café du Croissant, in the centre of Paris, when a man walked into the bar with a rifle and shot him twice in the back. He died from the attack. Three days later war was declared between France and Germany.

Who shot him and why?

A young French nationalist, appropriately named Raoul Villain, age 29, who had opposed Jaurès’ pacifism and wanted a war so France could take revenge on Germany and to recover both French pride and territories lost in the Franco-Prussian war of 1870-1. Villain was arrested and imprisoned but after the war he was cleared of the killing and exiled himself on the Spanish island of Ibiza. He was killed in 1936 by Republicans fighting against the Franco regime in the Spanish civil war.

Tell me more about Jaurès

Jaurès was born in 1859. He became a socialist in the late 1880s and later took up the cause of a group of striking miners in Carmaux in southern France. The year before the outbreak of World War I he addressed 100,000 people at a rally in Paris in an attempt to mobilise workers against a conflict that was looking increasingly likely.

He later used his contacts with German socialists to try to organise aninternational general strike in protest. For some, he was a revolutionary while to others he was a republican or a patriot.

Is he still a symbolic figure in French politics?

Indeed. Even more so given there is a Socialist government in power whose leader is considered (if opinion polls are to be believed) to be the most unpopular president in history. Jaurès is such a major historical figure in France that both the French left and right now seek to lay claim to his legacy – much to the irritation of the country's far left. Today, French parties of all political stripes are keen to associate themselves with Jaures. "Jaures, the man of socialism, is today all of France's, we are fighting over him…," Hollande said earlier this year, in an acknowledgement of his enduring importance.

In 2007, conservative former president Nicolas Sarkozy repeatedly cited Jaures during his successful presidential campaign. The far right too have sought to associate themselves with him. Gilles Candar, president of France's Society for Jaurès Studies, said.

Jaurès had become a figure who represented something different to everyone. "Not everyone is referring to the same Jaures," he said.

So what happened on Thursday?

François Hollande and German Vice-Chancellor Sigmar Gabriel on Thursday led the 100th anniversary commemoration by laying wreaths outside the Cafe du Croissant in central Paris. Asked what message could be taken from Jaurès' life, Hollande said: "Peace, unity and the coming together of the republic."

So is Hollande fulfilling his legacy?

That is very debatable to say the least. The idea of Hollande paying respects to the founding father of France’s Socialist movement has been too much for many staunch leftists in France. Earlier this year, when Hollande visited the town where Jaurès served as a deputy, he was whistled by members of the public, who believe he has betrayed the legacy of their hero and cast aside the principles of the Socialist Party.