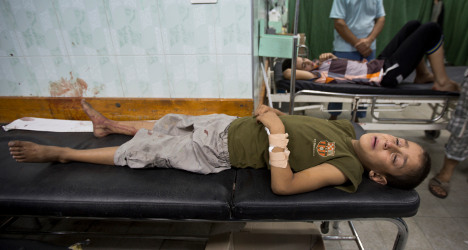 France has condemned the deadly shelling of a UN school in Gaza by Israel. Photo: Mahmud Hams/AFP

France on Wednesday condemned the shelling of a UN school in Gaza that killed 16 people, calling for an immediate ceasefire.

Paris "demands the establishment of an immediate ceasefire," the statement said, adding that "all efforts must converge on this goal."

The White House also condemned the shelling of the school in the Jabaliya refugee camp in northern Gaza, where more than 3,000 displaced Palestinians were sheltering from an assault by Israeli forces on Hamas militants.

It is the second time in a week that a UN school housing refugees has been hit.

Also Wednesday, at least 17 people were killed in an Israeli strike on a packed Gaza market as Israel was observing a four-hour humanitarian lull.

Israel had said its truce, which began at 1200 GMT, would not apply in places were troops were "currently operating", hours after the army made what it called a "significant advance" into the narrow coastal strip.