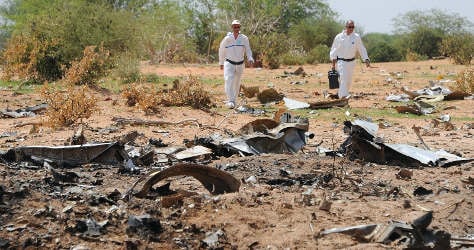 It may take years to identify the remains of the passengers killed in the Air Algérie crash. Photo: Sia Kambou/AFP

An Air Algerie McDonnell Douglas 83 flying from Burkina Faso to Algiers crashed in northern Mali last Thursday, killing all 118 people on board.

"It is too early to talk about identification, it is an operation that could take weeks, months and maybe years. The important thing is to find the truth," Abdelkader Kara Bouhadba told reporters.

He added that identifying the victims' bodies was a "human priority".

Thirteen Algerian forensic police specialists have travelled to the site of the crash in the Gossi region, around 150 kilometres (95 miles) from Gao in northeastern Mali, along with counterparts from France, Mali and Spain.

Bouhadba said it had not been possible to analyze several samples collected at the crash site because conditions there were "inhospitable" to forensic work and conservation of the bodies.

But Ali Feragui, deputy head of the forensic police, said "all the passengers on board the aircraft will be identified (thanks to) the techniques and experience of the different experts".

Forensic experts have resorted to using DNA samples to identify the dead, mostly because of the state the bodies were found in. The extreme heat at the crash site has further complicated their work.

President Francois Hollande has said the remains of all passengers on the plane — not just the French — would be flown to France.