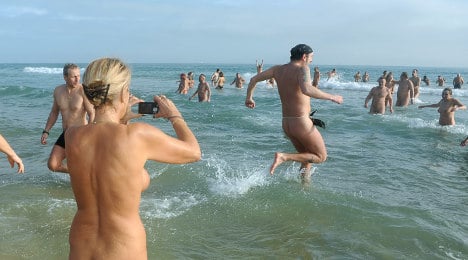 Planning on taking your clothes off on a French beach this summer? Before you do, reads these 10 dos and don'ts. Photo: Pascal Guyot/AFP

The world was chattering this week about an Elle magazine article that said French women, who were once famous for their willingness to go topless, are now more likely than ever to keep their bikini tops on while on the beach.

The change is explained by a mix of skin cancer concern and a new vision of feminism which has left fewer Gallic women ready to go the way of Brigitte Bardot. That said, it’s still a country where there is an extraordinary acceptance of bathing in the buff that is evident to anyone who has ever been to the French Riviera in the summer.

But like all things French, getting naked on its beaches is a controlled, civilized affair that is governed by some rules that are pretty simple as long as you know them. After all, how can you tell where it's OK and where it's a crime to do the full monty?

To keep you from being hit with a fine or getting yelled at by an insulted Frenchman, The Local has gathered together some essential things to know before you bare all on the beach or in Paris. There are also some practical tips in here to help you avoid the worst sunburn you’ve ever had. Click on the link below.

Nudity on French beaches: The dos and don'ts