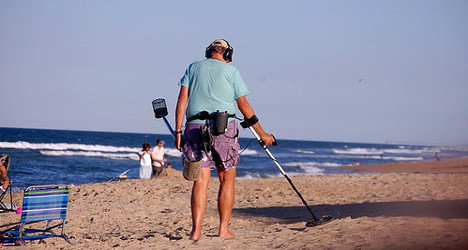 A Frenchman is in a big trouble for using his metal detector to 'pillage' archaeological sites. Photo: Jesshg/Flickr

While taking the stand in his own defense this week a Frenchman accused of looting thousands of valuable historical items from some of the country’s most culturally important sites, explained his crime simply.

“I always wanted to be an archaeologist, but I couldn’t,” the 60-year-old winemaker told a court in the Paris suburb of Meaux on Tuesday, AFP reported.

For years he’d used a metal detector to scour sites that are protected by law, taking home a piece here and a piece there. Until he had a collection of some 2,300 items including coins, pottery, rings and necklaces that prosecutors say is worth tens of thousands of euros.

French customs authorities have asked the court to impose a €200,000 fine on the man, who is accused of illegally searching archaeological sites. Judges will decide whether he is guilty at a later date.

The case began by pure chance in February 2012 when customs officers pulled over the winemaker, who was not named in media reports, during a routine check. What the officers found next was anything but routine.

In the winemaker's vehicle agents discovered 112 Gallo-Roman coins, which led prosecutors to order a search of the man’s home. There police found the stunning collection of items he'd amassed through the years. His collection has since been turned over to the Ministry of Culture.

“These uncontrolled digs are a real problem, because it is a catastrophe for science,” deputy director of archaeology at the Ministry of Culture told the court, AFP reported. “Archaeology cannot be the victim of its own success. Archaeology must be left to professionals.”

According to historical protection group Stop Looting Archaeological and Historical Heritage (Halte au Pillage du Patrimoine Archéologique et Historique), at least 250,000 objects are pulled illegally from the ground each year in France. The vast majority of the items are from Gallic and medieval periods and include lots of coins.

Jean-David Desforges, head of association, told The Local recently that many objects from ancient Gaul, and Nazi artefacts from World War II were being illegally dug up and sold on by thousands of prospectors using metal detectors.

Desforges said many of the “pillagers” come from the UK and France's other neighbouring countries to hunt for archeological treasure and sell it abroad.

“In Normandy and part of northern France a lot of English will come over with metal detectors and scour the battle fields from the First and Second World Wars. It is the same along the border with Belgium, Luxembourg, and Germany where these people will cross into France to search war battlefields and take what they found back to their country,” he said.

Every time something is dug up, Desforges says, “France loses part of its history and heritage each time.”