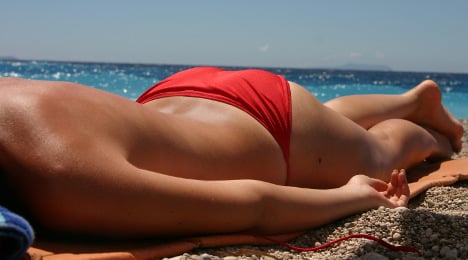 Why going topless on French beaches is no longer de rigueur. Photo: Shutterstock

The beaches of France, especially those around the chic resorts of the French Riviera, have undergone a change in recent years and continue to do so, new reports claim.

This week France’s Elle magazine suggested that sunbathing topless is no longer the done thing on 'les Plages' of St Tropez, Nice and the rest of the Riviera.

The magazine is certainly not the first to suggest French women are covering up more and more, with the decline of “Le Topless” apparently having been spotted back in 2009, but with the French summer in full swing the fashion magazine, in its article 'La Fin de Topless sur la Plage' (The end of toplessness on the beach) has reignited the debate over bare chests.

Elle points to three reasons why the old “monokini” (bikini bottoms without the top) is disappearing out of sight as tan lines make a comeback.

Firstly, the health concerns surrounding skin cancer, secondly, due to impact of the growing perception that topless woman are easy and thirdly because of the famous topless “sextremists” from groups like Femen whose semi-naked stunts across Europe have given the impression that baring chests is now only for activists, not sunbathers.

An opinion poll released last year revealed that only 18 percent of French women said they would consider sunbathing topless and just 12 percent do it regularly. That same poll revealed 50 percent of women believed the trend to be no longer fashionable.

Elle describes the change in culture as a “worrying sign of a regression in the place of women”.

In France going topless has been linked, some say erroneously, with women’s liberation since the 1960s when actress and sex icon Brigitte Bardot famously began revealing almost all on French beaches.

In the 1970s the government refused to ban the act and the liberal attitude towards the ditching of bikini tops appeared to become a source of French national pride.

However going topless is not welcome on all French beaches. Anyone caught wearing just the “monokini” at Paris's annual summer beach festival Paris Plages, faces being hit with a fine as well as an order to cover up.

As this poster below shows, authorities in Paris are less flexible when it comes to women taking off their tops. French researcher and sociologist Christophe Colera, author of the book Nudity: Practices and Meanings told The Local that an “unjustified” fear of cancer, and concerns about the shape of the breasts has played a role.

“But there's also the phenomenon of a return towards modesty.”

Colera also backed up the idea that toplessness has been affected by the fact that breasts have become over sexualized.

“Toplessness comes in cyclical fashions. In the 1960s it was associated with the rise of mass feminism and in the 1990s it was linked to aesthetic concerns, but was then affected by public health concerns around breasts.

“Today going topless is more about asserting femininity, often in a provocative way, by doing it in unexpected places.”

However French writer and essayist Christian Gambaz, believes there are two other reasons why French women are more keen to keep their bikini tops on even if it means sacrificing a perfect bronzing.

“One reason is that topless women on the beach are often harassed by young men these days. After it happens they are less likely to go semi naked,” he tells The Local.

“This happens more in certain built-up areas like Nice and Cannes. Certain youngsters don’t know how to behave around female nudity.

“And there’s also the fact that the prudish American view of nudity has taken hold in France. If a woman goes topless in Florida, someone would call the police. It seems these US values are coming to our shores,” he said.

Gambaz deos not believe the fashion is necessarily dying out. He points to the fact that many French women will happily go topless on beaches in Spain or Croatia this summer and claims the number of topless women on French plages will just depend on where you are in France.

“On the beaches of the Atlantic coast around Les Landes is where you will see people going topless because there’s not the same crowds as on the Riviera,” he says.

Gambaz believes Europe needs to protect its easygoing culture around nudity but if a recent study by travel site Expedia is anything to go by, then it is alive and well, at least in some countries more than others.

The survey revealed that nearly one in three Germans and Austrians (28 percent) has sunbathed nude on the beach, compared with 12 percent of Britons, 18 percent of Norwegians, and 17 percent of Spanish.

Is the trend of going topless really dying out in France? If you are going to beaches in France this summer let us know whether it still feels like the 1960s.