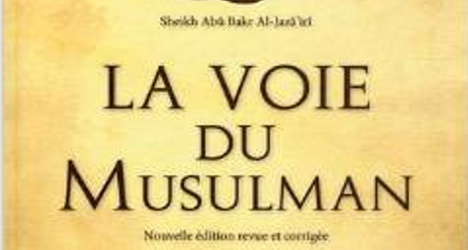 Among the pulpy best sellers and children’s activity books for sale in up to a 1,000 mainstream stores around France is a volume that has ignited a heated discussion online and in public.

It’s called 'The Way of the Muslim' (La Voie du Musulman) and as part of a special push by the book's Lebanese publisher the volume has popped up on hundreds of supermarket, department store and bookshop shelves during the Muslim holy month of Ramadan.

The book’s opponents, who call it Islamist propaganda, note that it contains passages that say heresy “is punishable by death” and “Muslims should set up all sorts of weapon factories to make all types of weapons used in the world…even if it is to the detriment of the well-being of the nation,” French daily Le Figaro reported.

Some 18,000 people have signed online petitions calling for supermarket chains like Carrefour to pull the books off their shelves, yet to date the books remain on sale in many shops. The continued availability of the tome has drawn harsh words from critics like Raymonde Schmitt, who signed one of the petitions.

“Carrefour is selling propaganda that encourages killing, it’s a crime of complicity,” he wrote.

Tweeter @U235555 wrote: “The book 'The Way of the Muslim' should be removed from the shelves at Carrefour FNAC Amazon. Incitement to hatred.”

But the volume’s publisher told France Television the attacks on the book by Algerian Sheikh Abu Bakr al-Jazairi are “saddening.”

Mansour Mansour, who runs publishing house Albouraq, added that critics have seized onto the “two or three pages that preach protest,” out of a 500-page book that was first translated into French in 1985.

“It’s appalling that this book is being called a manual for jihadists,” Mansour said.

He’s got supporters online too, including Tweeter @tekinfonumerik who wrote: "'The way of the Muslim' is propaganda!!!! Did you read it before talking rubbish? Brainwashing or mediocre journalism.”

The government is aware of the book and has received a handful of calls about it to the hotline set up earlier this summer as part of a series of measures to head off the threat of battled-hardened jihadists staging attacks in France after returning from Syria.

But the government has not taken steps to ban the book or pull it from store shelves, unnamed sources told Le Figaro, which assured the newspaper they were “dealing with”  'The Way of the Muslim'.