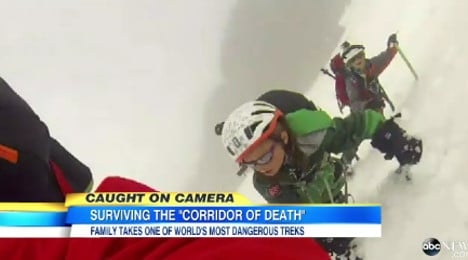 A French mayor has filed a complaint against an American father for tying to climb Mont Blanc with his kids. Photo: screengrab ABC news

The mayor of a French Alpine town lodged a complaint on Monday against a man whose attempt to climb Mont Blanc with his young children to set a world record almost proved fatal.

Patrick Sweeney, an American climber, tried to go up western Europe's highest peak with his nine-year-old son P.J. and 11-year-old daughter Shannon but the children got caught in the start of an avalanche, forcing them to call off the attempt.

The expedition was being filmed and the footage of their fall was subsequently aired on the ABC television channel in the US earlier this month, causing an outcry in the United States and France.

Jean-Marc Peillex, mayor of the nearby town of Saint-Gervais and a critic of the number of inexperienced people attempting to go up Mont Blanc, had already slammed Sweeney as "reckless".

But on Monday, he went a step further and lodged a complaint at the local police station against Sweeney for "endangering the life of others", according to an official document posted on his Twitter account.

"If you don't do anything against these people, then they will win," he told AFP. Sweeney had so far not commented on the criticism, nor had he reacted to the complaint.

According to the video aired on ABC, Sweeney wanted to "set the world record" for the youngest mountaineer to make the ascent, a record held by Briton Asher Silver, who conquered the 4,810-metre (15,780-feet) peak aged 10 in 2009.

Peillex had already slammed the attempt as "a demonstration of pride pushed to the extreme, to the point of putting the life of his own children in danger and boasting about it on a popular television channel."

The ABC clip describes Mont Blanc as the "white killer" and the passage where the two children fell as the "Corridor of Death", but Peillex disagrees.

"Mont Blanc is not a killer but remains a high-altitude glacial universe that dictates its own laws," he said.

"The ascent of Mont Blanc remains a thing for mountaineers, it's not a trek nor is it a terrain that can be exploited for a mention in the Guinness World Records."

Authorities are increasingly concerned about the number of climbers attempting dangerous ascents on Mont Blanc, some of them inexperienced.

On Sunday, two well-equipped Irish mountaineers died in the Mont Blanc mountain range, falling after their rope came undone as they were going up the 4,000-metre (13,000-feet) "Giant's Tooth".

The deaths came just two days after two Finnish mountaineers were also killed on the Mont Blanc massif when they slipped on a mound of snow and fell into a crevasse.