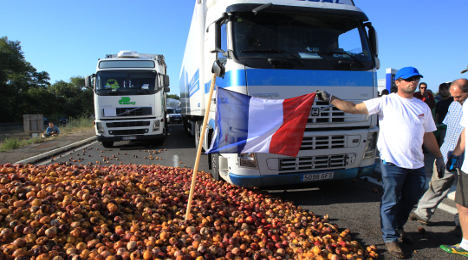 French fruit growers unload a truck of Spanish peaches onto the road as the "peach war" between the two countries heats up. Photo: Raymond Roig/AFP

In the past two weeks, 150 trucks have been stopped and 10 infractions recorded, France's agriculture ministry said on Monday on receiving French fruit growers who have complained of what they see as unfair "dumping" of produce in their home market.

France's operation to make sure the trucks "respect the rules for the sale of fruit and vegetables" will continue in the coming weeks, Agriculture Minister Stephane Le Foll said after the meeting.

He added that the European Commission had been asked by France, Spain, Greece and Italy to consider putting in place "exceptional market-managing measures" in the sector.

The French fruit-growers' anger is boiling over amid fears that their industry is on the verge of disappearing entirely because of diving prices. Farmland across France given over to growing peaches and nectarines has halved in size over the past decade.

Luc Barbier, head of the French fruitgrowers' federation FNPF, told AFP that the conflict between French and Spanish producers has never been so bad.

The Spanish counterparts are practising "trade dumping to kill the French market in order to be the only suppliers," he charged, calling for stepped-up border checks to verify the origin, quality and price of fruit cargos.

"The core problem is the cost disparity with Spain which means we can't be competitive," he said.

Spain's FEPEX federation of fruitgrowers and exporters, though, denied the French accusations.

"The fruit crisis is affecting all European producers," it said, slamming recent attacks on Spanish trucks.

FEPEX also called on the European Union to take urgent steps to support the fruit market, underlining the importance of the fruit sector to Spain's economy. Last year, Spain exported 910,000 tonnes of fruit with stones (peaches and the like), bringing in nearly €1 billion ($1.3 billion).