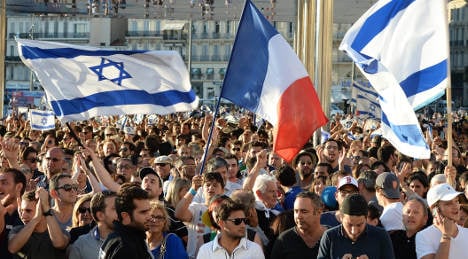 Tensions were high in Marseille on Sunday as dozens of pro-Palestinian protesters confronted thousands of marchers who were showing their support for Israel.

Several local mayors joined thousands of demonstrators on the streets of Marseille, who turned out to back Israel's right to defend itself against Hamas.

“Hamas Murderers”, “Stop Islamist terrorism” and “Israel will live” were just some of the slogans shouted by demonstrators or scrawled on their banners.

But the atmosphere changed when dozens of pro-Palestinian protesters approached the rally from adjacent streets and began shouting anti-Israel slogans.

Riot police quickly moved in to prevent any violence and surrounded the youths. According to journalists from AFP several of the pro-Palestinians were seen making the "Quenelle" gesture (see photo), referred to as critics as an inverted Nazi-salute and considered by many to be anti-Semitic.

The demo came after numerous pro-Palestinian marches had been held across the country. In Paris on Saturday police made scores of arrests as another protest ended in violence.