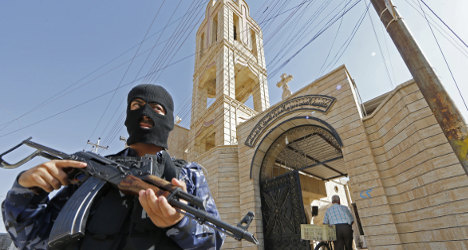 France said Monday it was ready to help facilitate asylum for Christians in Iraq displaced by a jihadist onslaught, saying it was "outraged" by their persecution.

"We are ready, if they so desire, to help facilitate asylum on our territory," Foreign Minister Laurent Fabius and Interior Minister Bernard Cazeneuve said in a joint statement.

Thousands of Christians and other minorities have fled the northern Iraqi city of Mosul and other areas after Islamic State insurgents led a sweep across Iraq's north and west last month.

The militants had ordered Christian families to convert to Islam or leave the city, prompting the mass exodus.

Those who failed to comply were threatened with execution, and the property of those who left was forfeited to the Islamic State, a statement from the group seen by AFP said.

"France is outraged by these abuses that it condemns with the utmost firmness," both ministers said.

"The ultimatum given to these communities in Mosul by ISIL is the latest tragic example of the terrible threat that jihadist groups in Iraq, but also in Syria and elsewhere, pose to these populations that are historically an integral part of this region," they added, referring to the jihadist group's former name of Islamic State of Iraq and the Levant.

The Christian presence in the region spans close to two millennia.

Before the 2003 US-led invasion, more than a million Christians lived in Iraq, including more than 600,000 in Baghdad and 60,000 in Mosul, as well as a substantial number in the oil city of Kirkuk and in Basra.

The United Nations Security Council has already denounced the persecution of Christians and other minorities in Iraq, warning such actions can be considered crimes against humanity.

In a unanimous declaration adopted last week, the Council condemned "in the strongest terms the systematic persecution of individuals from minority populations and those who refuse its extremist ideology in Iraq by ISIL and associated armed groups," it said.

"The members of the Security Council further recall that widespread or systematic attacks directed against any civilian populations because of their ethnic background, religious beliefs or faith may constitute a crime against humanity, for which those responsible must be held accountable."

The Council also asked that the Iraqi government and the UN intensify their efforts to serve the "urgent" humanitarian needs of people displaced by the conflict and to tackle the "terrorist threat" against minorities.

Fabius and Cazeneuve, meanwhile, said they would soon hold talks with the representatives in France of Iraq's Christian communities