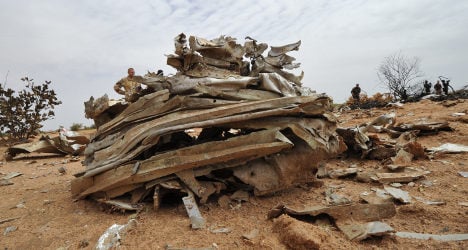 This photo shows debris of the Air Algerie Flight AH 5017 scattered at the crash site in Mali's Gossi region, west of Gao, on July 26, 2014. Photo: AFP

France said on Monday the pilots of the Air Algérie passenger plane that crashed in Mali, killing all 118 people on board, had asked to turn back, in a new development to a tough probe into the tragedy

"What we know for sure is that the weather was bad that night, that the plane crew had asked to change route then to turn back before all contact was lost," Foreign Minister Laurent Fabius told reporters in his latest briefing about Thursday's disaster.

It had previously been known that the crew asked to change route due to bad weather conditions, but the revelation they then demanded to turn back is a new development.

Speaking hours after the black box flight recorders of the McDonnell Douglas 83 jet arrived in Paris from Mali to help investigators, Fabius added air crash experts currently on the remote desert site of the accident were toiling away in "extremely difficult conditions".

Fabius said that more than 20 air accident experts were currently in Mali's remote, barren Gossi area where the plane came down, working in tough conditions to determine why the plane plunged into the ground and to try and recover remains of the victims.

"The (human) remains are pulverized, the heat is overwhelming with rain to boot and with extreme difficulties in communicating and in transport," he said at the foreign ministry, where the flag flew at half-mast in mourning for the tragedy that saw entire families wiped out.

Video footage of the Gossi area showed a scene of devastation littered with twisted and burnt fragments of the plane.

France bore the brunt of the tragedy, with 54 of its nationals killed in the crash of flight AH5017, which had taken off from Ouagadougou in Burkina Faso bound for Algiers.

On Monday, flags on government buildings across the country flew at half-mast in mourning for the victims, who also hailed from Burkina Faso, Lebanon, Algeria, Spain, Canada, Germany and Luxembourg.

Several towns across France that lost entire families or couples to the tragedy also announced they would pay hommage to people they held dear.

The central village of Menet, where a family-of-four perished in the crash, said a silent march would take place Friday in front of the places where the victims used to go, such as the school or certain shops.

"People in the village can't quite realise what happened. For us, the footage we see on television is extremely violent," said the mayor Alexis Monier.

In Paris, President Francois Hollande held another crisis meeting Monday morning with ministers at the presidency.

Paris has taken the lead in the probe, and Hollande has said the remains of all passengers on the plane — not just French nationals — would be repatriated to France.

The accident is the worst air tragedy to hit France since the crash of the Air France A330 from Rio de Janeiro to Paris in June 2009.

It was also the third crash worldwide in the space of just eight days, capping a disastrous week for the aviation industry.

And a Taiwanese aircraft crashed in torrential rain in Taiwan on Wednesday, killing 48.

Apart from air accident experts, France has also dispatched military forces already stationed in Mali since its offensive last year to free the country's north from the grip of Islamists and Tuareg rebels.

Fabius said that by Monday evening, a total of 200 French forces were due to have arrived on site, as well as Malian soldiers and Dutch forces from the MINUSMA UN stabilisation force in Mali.

"The site has been secured," he said. 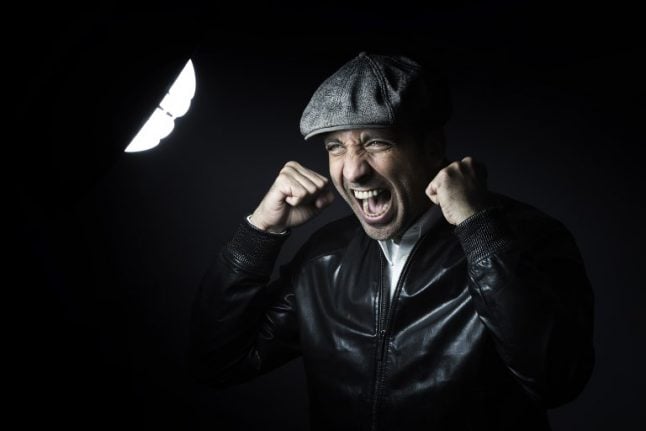 French scriptwriter Abdel Raouf Dafri. Photo: Joël Saget / AFP
Abdel Raouf Dafri told AFP that he had been itching for years to broach the delicate subject. The writer of the Oscar-nominated “A Prophet”, and the Emmy-winning television series “Braquo”, has Algerian roots but was born in the French port of Marseille, where many former French “pied noir” colonists who were forced to flee Algeria settled.
The film's title “May an impure blood…” (Qu'un sang impur…) is plucked from the most controversial line in the French national anthem, “La Marseillaise”, which ends “…water our fields”.
Dafri cleverly turns it around to refer to “the blood of the colonised” who suffered under the French, which “just goes to show how universal our national anthem is”, he argued.
His story, however, centres on a group of French conscript soldiers sent on a “grotesque mission that none of them want to go on.
“Like a lot of military operations, it serves little or no purpose,” said Dafri, who also scripted the acclaimed “Mesrine” gangster films.
“When you make a film about World War II, you know who the good guys are,” the writer said. “The war in Algeria is more complicated, because nobody was nice.”
Torture
The film opens with a brutal interrogation of three Algerian villagers — the sort of violent questioning that the founder of France's far-right National Front party, Jean-Marie Le Pen, said he proudly took part in.
It was only last year that the French government finally acknowledged that these interrogations were part of an official system of routine torture during the bloody seven-year war, before Algeria declared independence from France in 1962.
“All the violence which I show in the film happened in reality,” Dafri insisted.
Yet the film's lead character — a tough non-commissioned officer who has survived France's earlier colonial defeat in Indochina — is inspired by the rather more sympathetic figure of Roger Vandenberghe.
Vandenberghe, a tragic and highly decorated hero of that earlier conflict, died aged 24 in Vietnam.
“I wanted a hero, but not a Rambo,” the first-time director said. “A man who was both fragile deep down but who was also capable of cruelty.”
With France and Algeria still unable to agree on a death toll more than half a century after the war ended, Dafri insisted that he wanted “to be as honest and as just as possible”.
After much research, he borrowed a phrase from the ethnologist Germaine Tillion as his guiding light. Tillion was a French resistance hero and concentration camp survivor who secretly met Algerian guerrilla leaders in a bid to end the bloodshed. She tried to win hearts and minds as the military stepped up their repression.
French-Algerian identity
“When in 1828 our ancestors crossed the sea to seek revenge for a slap with a fly-whisk, Algeria was an archaic country, and France was too,” Tillion wrote.
The quotation refers to how France used a clash between the country's former Ottoman ruler Hussein Dey and the French consul in Algiers as a pretext to invade the country.
Tillion tried to bring health services and education to Algeria's “pauperised” indigenous population as the war raged. She was among the first to condemn the systematic torture of suspects.
To understand the Algerian war, “you have to go back to the beginnings of the history of France and its principal colony”, Dafri said.
But writing the film he also had to confront his own personal history and identity as the French-born son of Algerian emigrants.
“I wanted to understand why my parents brought me into the world in France in 1963” — a year after the war ended — “when their own country had just been liberated from its oppressors.”
Dafri said he is dedicating the film, which will be released later this year, both to the Algerian people and to the young French conscripts who were forced to serve there, “thrown into a disaster” that was not of their own making.
According to the French historian Benjamin Stora, conscripts made up two-thirds of the 23,000 French soldiers killed in Algeria. Estimates of the number of Algerians who died ranges from around one million to between 300,000 and 400,000, three percent of the local population at the time.
Dafri is less forgiving of those in power. “The Algerian people suffered from colonisation and then independence led by corrupt men who are still in power,” he said.
“I don't want people to say that I have taken sides” when they see the movie, Dafri said. “I do not have a side to take: France is my country.”
By AFP's Laurence Thomann and Fiachra Gibbons 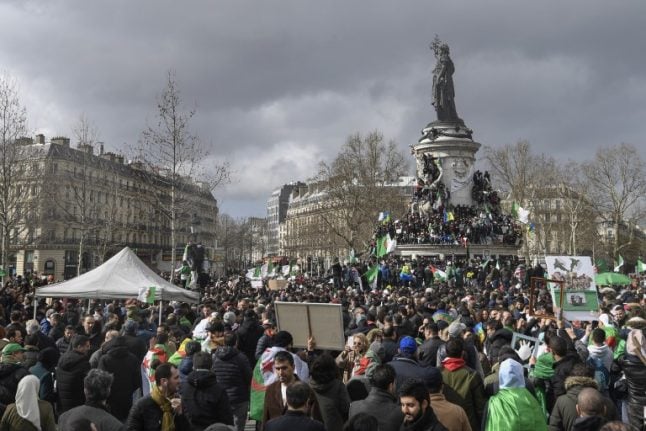