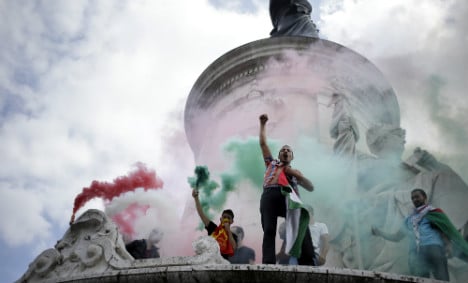 Pro-Palestinian demonstrators spray fumes with the colours of the Palestinian flag, on the Republique square in Paris, during a banned demonstration against Israel's military operation in Gaza and in

The rally had drawn 4,000 people to the capital's Place de la Republique, the interior ministry said, while organisers put the turnout at 10,000.

Police who stepped in to disperse the rally responded with tear gas when they were targeted with rocks and other projectiles. About 12 police were slightly injured.

Interior Minister Bernard Cazeneuve said while the young people protesting had been mostly peaceful "there were troublemakers at this demonstration", some of whom had come armed with the intention to cause violence.

"There were 70 arrests and 30 (of them) have been detained, some of whom had significant weapons, including clubs… and knuckle-dusters," he said.

The demonstration against Israel's Gaza offensive that has killed more than 1,000 Palestinians came after other protests last weekend in Paris and a suburb that had also initially been banned descended into chaos.

Organisers of Saturday's protest had tried going to court to get the ban overturned, but they were unsuccessful and Cazeneuve had warned that they would be held "responsible for any unrest… and liable to penal sanctions".

A police source said officers had been under strict orders to take in people who made anti-Jewish statements or gestures.

The crowd turned out Saturday with many holding aloft Palestinian flags and the red banners of the far-left New Anticapitalist Party that had called on people to defy the ban.

"Israel clear out of Palestine, the era of settlements is over", "Israel assassin, Hollande accomplice", "Israel, piss off, Palestine isn't yours" were some of the slogans shouted by protesters.

After an initial peaceful start, police began firing tear gas when some hooded protesters threw cans and other objects at them, and several journalists covering the event were roughed up.

Some 2,000 police were mobilised, and many of them were present on the square to stop the rally from moving on to other parts of the French capital.

Elsewhere in the country, nearly 10,000 people turned out in the eastern city of Lyon for a similar protest, though it was not banned and went off peacefully.

In the southern cities of Marseille and Nice, hundreds also turned out in support for Palestinians.

The Israel-Gaza conflict has stirred passions in France, home to the largest Muslim and Jewish communities in western Europe with around five million Muslims and half a million Jews.

While many protests around the country have gone smoothly, some recent demonstrations in Paris and the suburb town of Sarcelles have descended into
chaos.

In Sarcelles last weekend, Jewish businesses were looted and in one violent Paris demonstration two weeks ago, protesters tried to storm two synagogues, raising concerns among the Jewish community about anti-Semitism.

But on Wednesday, several thousand people protested peacefully in Paris. Police said the rally attracted about 14,500 people, while organisers said 25,000 showed up.