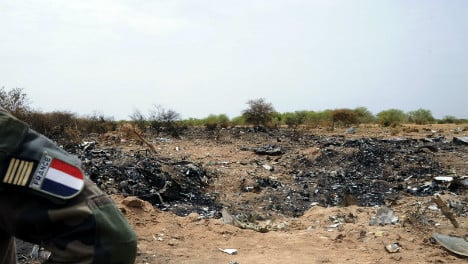 Officials who had already reached the remote, barren area described a scene of total devastation littered with twisted and charred fragments of the plane that was carrying 118 on board, including entire families.

No one survived the impact and France bore the brunt of the disaster with 54 nationals killed in Thursday's crash of the McDonnell Douglas 83, which had taken off from Ouagadougou in Burkina Faso and was bound for Algiers.

"It is difficult to retrieve anything, even victims' bodies, because we have only seen body parts on the ground," said General Gilbert Diendiere, chief of the military staff of Burkina Faso's presidency.

He was a member of a delegation sent to the crash site in the Gossi area, about 100 kilometres (60 miles) from Mali's northern city of Gao, by President Blaise Compaore.

Travellers from Burkina Faso, Lebanon, Algeria, Spain, Canada, Germany and Luxembourg also died in the crash, increasingly being blamed on bad weather that forced the pilots to change course.

The French army released initial images of a scene of devastation, with fragments of the jet littering a scorched earth in what is clearly a desolate environment.

Such was the apparent violence of the crash that debris was barely recognisable as parts of an aircraft.

"Debris was scattered over an area of 500 metres which is due to the fact that the plane hit the ground and then probably rebounded," Diendiere said.

Meanwhile, the scale of the tragedy for some communities was becoming clear, as it emerged that 10 members of one French family died in the crash.

"It's brutal. It has wiped an entire family from the earth," said Patrice Dunard, mayor of Gex, where four of the Reynaud family lived.

And the small town of Menet in central France was left devastated when residents discovered that a local family of four — a couple, their 10-year-old daughter Chloe and their 14-year-old son Elno — had died.

Denise Labbe of the local town hall said Chloe had confided to her teacher that she was scared of taking a plane, which she was doing for the first time.

In Lebanon, one family in the southern El-Kharayeb village died too — the third time that residents there had been involved in a plane disaster.

In 2003, 14 residents in the village died in the crash of a Boeing 727 going from Cotonou in Benin to Beirut, while four were killed in an Ethiopian Airlines accident in January 2010.

French President Francois Hollande, who was due to meet families of the victims Saturday, gathered in the morning with Prime Minister Manuel Valls and
the foreign, defence, interior and transport ministers to take stock of the situation.

The MD-83 jet was operated by Spanish charter firm Swiftair — a company with a good safety record — on behalf of Air Algerie.

French Interior Minister Bernard Cazeneuve said weather conditions appeared to be the most likely cause of the accident — the worst air tragedy for French nationals since the crash of the Air France A330 from Rio de Janeiro to
Paris in June 2009.

The Air Algerie crash was the third worldwide in the space of just eight days, capping a disastrous week for the aviation industry.

And a Taiwanese aircraft crashed in torrential rain in Taiwan on Wednesday, killing 48.

France has dispatched 20 police forces as well as experts from its Bureau of Investigations and Analyses which probes air accidents, tasked both with trying to identify the victims and finding the cause of the crash.

One of the black box flight recorders of the plane has already been retrieved.

France has also sent military forces already stationed in Gao because of an offensive it launched in Mali last year to try and rid the north of Islamist extremists.

French Defence Minister Jean-Yves Le Drian said that around 180 French and Malian forces were securing the crash site, as were 40 Dutch soldiers from the
MINUSMA UN stabilisation force in Mali.

This year has already seen Algeria mourn the loss of more than 70 people in the crash of a C-130 military aircraft in February.

The country is currently in a three-day period of national mourning for the latest crash.