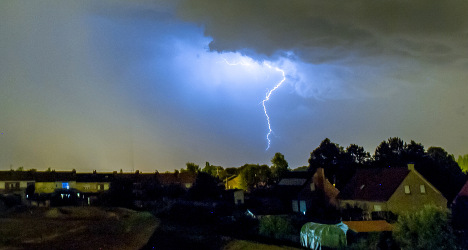 Much of south-western France, including parts of the popular Languedoc-Roussillon coast, was on Friday put on high alert with the national weather service warning that heavy rains and even hailstorms are expected to hit the usually sun-drenched region during the afternoon.

France Météo issued orange alerts – the country’s second highest weather warnings – for a total of 19 departments, stretching from the Pyrenees in the west to Hérault in the east, and climbing as far north as Charente-Maritime to the Languedoc-Roussillon coast in the south. “Disruptive rains and storms will intensify in the next few hours,” Météo France warned, saying local thunder- and hailstorms are expected in some areas where winds could reach speeds of up to 80 kilometres (50 miles) an hour.

The extreme weather could last as long as until 11pm on Friday evening, the service said.

It's been a tough couple of weeks on France's western side, with wet, windy and violent weather passing through last Friday as well. France also saw a mini-tornado that knocked down a tree which crushed and killed a man in a campground.