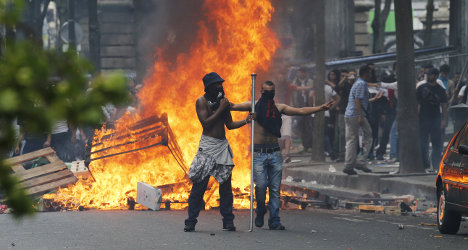 French police said Friday that a protest planned for the weekend in Paris against Israel's Gaza offensive has been banned, following several similar rallies that turned violent.

The ban, announced by police on Friday, comes in the wake of clashes earlier this month at pro-Palestinian demonstrations in which some protesters shouted anti-Semitic slogans and fought with police. Two of the rallies had been banned but went ahead anyway.

Earlier this week, French Prime Minister Manuel Valls warned that pro-Palestinian protests that carried a risk of turning violent would be banned.

Interior Minister Bernard Cazeneuve said the decision to ban the march was taken after authorities discovered that the demonstration would be spearheaded by the same organizers that held an unauthorized protest in the heart of Paris last Saturday and which ended with demonstrators clashing with police.

We want to “prevent more hate from spilling out on the streets of Paris,” he was quoted as saying by the daily newspaper Le Figaro. Following Friday's announcement, Cazeneuve called on the organizers to cancel the rally.

"I urge the organizers to abandon the event on Saturday," he told AFP, accusing them of taking a "high-risk path" if they went ahead.

But a lawyer representing the organizers of the rally said they had lodged a legal challenge against the ruling.

"The government is trying to ban a fundamental right", said Omar Alsoumi, an organizer of the protest and member of the Palestinian Youth movement.

On Wednesday, several thousand people protested peacefully in Paris against the Israeli offensive in Gaza.

Police said the rally gathered about 14,500 people, while organizers put the figure at 25,000.

The government, which had banned the prior protests seeking to restrain what it called anti-Semitic radicals, authorized the march after its organizers gave "security guarantees."

Israel's offensive in Gaza, which is in its 18th day, has killed more than 800 Palestinians and 33 Israelis.

The conflict has stirred up huge passions in France — home to the largest Muslim and Jewish communities in western Europe with around five million Muslims and half a million Jews.