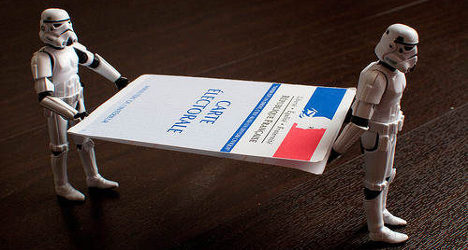 "This is not about halal meat in schools, it's about democracy" Should non-EU foreigners get the right to vote in France? Photo: Marc Lagneau/Flickr

The simmering, decades old debate about whether foreigners should be able to vote in France’s local elections pushed its way to centre stage again recently when President François Hollande said he has a plan to make it happen.

In the first part of our tête-a-tête on the divisive issue we heard from French mayor Flavien Neuvy who argued that if France gave non-EU foreigners the right to vote in local elections the country would be giving up part of its sovereignty.

In response we spoke to Vincent Rebérioux, the vice president of the Human Rights League, who insists a lack of voting rights for foreigners is hurting communities.

Rebérioux: "François Hollande hasn’t done anything different than his predecessors, that is, he’s done nothing. Perhaps there’s some maneuver here, but I think it’s escaped me.

"The truth is that foreigners already vote in France, they have since 1992, with the Maastricht Treaty. They are citizens of the 27 other members of the European Union. I’m always very surprised by fundamentalists who are against giving the vote to foreigners, because they have it already.

(European Union citizens are allowed to vote in local and European parliamentary elections in whichever EU country they happen to be living in. But non-EU nationals are not)

"What the treaty does is say that if you live in a place you have the right to elect your mayor. That’s it.

"This is not about halal meat in schools, it's about democracy"

"Besides politicians are more attentive to someone who is a voter than someone who is not. They pay closer attention to voters. A citizenship based on where you live simply creates democracy and I think that’s good for everyone.

"The French people already agree with giving foreigners the right to vote in local elections. They have been for it since 2000, according to opinion polls.

"Until 2000 French people were against giving foreigners the right to vote, but since then we have seen 52,53,54 percent of the population support it. Of course those numbers drop in periods of xenophobia and when harsh words come from the political class.

SEE ALSO: Ten reasons why you should become French "But people need to realize this is not about halal meat in school cafeterias, it’s about democracy. The political elites contaminate this. It’s just about being able to elect your mayor like other foreigners in France are able to do.

"Making reciprocity a prerequisite for granting the right to vote to foreigners is problematic at best.

"To do it we would have to create sub-categories of foreigners, some whom would have more rights some fewer.  For example, Morocco recognizes reciprocity with other countries, Algeria does not. So even in the same town different people would have different rights.

"In some ways reciprocity seems like common sense. We give a right to a foreigner and he gives us the same right. But sometimes common sense hides the truth.

"What about China? Can we really compare the democracy in France with democracy in China? Do we have to wait until a communist regime decides that its people have the right to give their point of view before we give Chinese people the right to vote in France's in local elections?

"Reciprocity could leave you thinking democracy is the same everywhere, when in fact it's imperfect everywhere."

If you want to read what French mayor Flavien Neuvy had to say on the issue CLICK HERE.