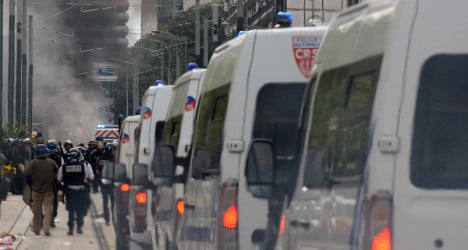 Riot police will be out in force on Wednesday for the pro-Palestinian protest. Photo: Pierre Andrieu/AFP

PREVIEW: Wednesday’s pro-Palestinian protest may have finally been given the green light, but police in the city will be on red alert to prevent any disorder.

The rally to denounce Israel’s ongoing military assault on Gaza, will be heavily policed, with reports that around 1,500 officers will be brought in to keep the peace.

Riot police will accompany marchers as they make their way from Denfert Rocherau at 6.30pm to the Invalides, in the centre of Paris. The security operation will be on the same level as that put in place for the annual July 14th parade, according to BFM TV.

As well as riot police from the CRS, there will be squadrons of mobile gendarmes, traffic police and officers from the police’s BAC crime squad on hand to keep the peace.

French President François Hollande said "the right to protest is repsected and respectable".

French minister Jean-Marie Le Guen said: “The state has put in place considerable means to prevent any trouble. It’s an exceptional operation for a particular time.”

France’s Interior Ministry was under pressure to allow the march to go ahead after being slammed for banning previous demos that ended in violence. But PM Manuel Valls said after sufficient "security guarantees" had been given the march will be allowed to go ahead.

Critics say by outlawing the demos it merely heightened the feeling of injustice and also gave the trouble makers a chance to take over.

Also speaking on Wednesday Interior Minister Bernard Cazeneuve fired out a warnign to protesters, saying: "I cannot accept when someone shouts 'death to Jews' during a demonstration. If some protesters utter such words, they will be arrested."

"I have given specific orders to security forces so they can quickly intervene if any anti-Semitic acts are committed,” Cazeneuve told France Inter radio.

Talking about the decision to ban previous protests Cazeneuve said: "The right to protest is the rule… banning demonstrations isthe exception." Wednesday’s demo has been organised by the National Collective for a Just Peace between Israelis and Palestinians and will bring together other groups like France's League of Human Rights (LDH) and France Palestine Solidarity as well as trade unions and leftist parties.

The collective hailed the decision to allow the march to go ahead as “a victory for democracy and freedom of expression”, however others, notably politicians on the right, have blasted the government for caving in under pressure.

A poll in France on Wednesday revealed however, that 62 percent of the population favoured a ban on the protests in light of the recent trouble.

The march will pass along, the Avenue de l’Observatoire, then Boulevard de Montparnasse, before heading to Boulevard des Invalides and finishing on Rue Constantine.

It is due to disperse around 9pm. Whether it does so peacefully may depend on how successful the police’s security operation is or whether groups intent on causing trouble are allowed to hijack a peaceful demo.

Protests will also take place in the cities of Lyon, Lille, Reims and Toulouse on Wednesday.