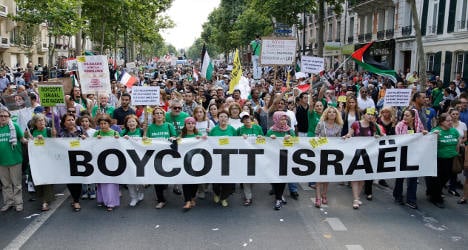 Several thousands Wednesday held a fresh protest in Paris against the Israeli offensive in Gaza amid tight security days after similar rallies descended into violence and looting.

Police said the rally gathered about 14,500 people, while organisers put the figure at 25,000.

The government, which had banned the prior protests seeking to restrain what it called anti-Semitic radicals, authorised the march after its organisers gave "security guarantees", Prime Minister Manuel Valls said.

More than 1,000 undercover and uniformed officers were deployed along the march route, which ended in the upscale Invalides area where several government ministries are located.

The marchers, many of whom held Palestinian flags or stickers saying "Boycott Israel", shouted slogans such as "Israel killer" and "Long live Palestine, long live the resistance!".

Many protesters expressed their anger towards the French government and the country's president for failing to take a hardline stance against Israel.

Mina McCamery, from Paris told The Local: "I voted for Hollande and I would never expect this stance from a Socialist government. By not standing up to Israel he is legitimising the massacre of Palestinians.

McCamery and other protesters The Local spoke to were keen to insist that the protest was not anti-Semitic.

"We are not against Jewish people. We are against zionism and what is going on in Palestine," she said.

At the end of the protest orthodox Jews from an anti-zionist organisation were loudly cheered after leading chants of "Free Gaza" to a group of around 200 protesters.

"The state of Israel does not speak for Jewish people," said one of their speakers.

Many were concerned the protest would end in violence after two previous banned demos degenerated into riots at the weekend.

"The only time pro-Palestinian demos end in violence is when the government has banned them," a 26-year-old man named Islam told The Local.

A group of young girls with the word "Gaza" and the Palestinian flag painted on the faces, were at the banned demo in northern Paris on Saturday that ended in a riot.

"The right to protest is a French right and they took it away," said Michele d'Almeida. "People were angry against the French government."

In addition to the Paris event, staged by a coalition of pro-Palestinian and left-wing groups, demonstrations were also held in the cities of Lyon, Toulouse, Lille and Reims.

As the Paris marchers dispersed after the protest, a few threw bottles at the police, who did not respond.

Shortly after the march, 16 people were arrested in the Jewish quarter of Paris's historic Marais district after attempting to break into a restaurant while yelling "anti-Semitic insults," a police source said.

A witness at the scene said that before police arrived, members of radical Jewish groups had intervened as the group tried to force their way into the closed restaurant while yelling "Death to the Jews!" and "Israel murderer."

Six people were killed in an anti-Semitic bombing and shooting attack at a restaurant in the popular tourist area in 1982.

Before the demo President Francois Hollande issued a reminder to protesters that the "responsibility of the state, the government and the president is to ensure that order is respected."

Interior Minister Bernard Cazeneuve had warned that anyone caught shouting "Death to the Jews!" or burning an Israeli flag during the marches would be arrested.

But Cazeneuve had also denounced the Jewish Defence League — deemed a "right-wing terrorist group" by the FBI — whose members clashed with pro-Palestinian supporters in an earlier Paris demonstration.

Banned rallies took place anyway at the weekend in Paris and its suburb town of Sarcelles, and ended in clashes, with police firing tear gas and arresting scores of protesters.

The main organiser of Wednesday's protest, the National Collective for Just and Durable Peace between Israelis and Palestinians, hailed the decision to let the demonstration go ahead.

"It's a victory for democracy and freedom of expression," said Taoufiq Tahani, president of the France-Palestine Solidarity Assocation that is part of the collective that called the rally.

Another pro-Palestinian demonstration in Paris is planned for Saturday, and authorities have not yet said whether it will be allowed to proceed.

The Israeli-Palestinian offensive has stirred up huge passions in France — home to the largest Muslim and Jewish communities in western Europe with around five million Muslims and half a million Jews.

Four groups helping to organise the rally — the influential CGT union and three leftist parties — are also deploying people during the rally to ensure there is no violence.